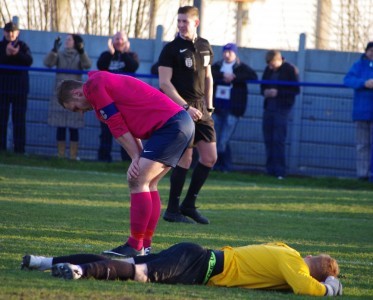 Shaw Lane Aquaforce’s magnificent adventure in the FA Vase is over after extra-time heartbreak in the epic quarter-final replay 3-1 defeat at Glossop North End.

Joe Thornton put Aquaforce  three minutes away from booking a trip to Cornwall to play St Austell in the semi-finals, but a wonder goal from Sam Hind rescued Glossop during a dramatic finish.

The visitors tired in the additional half-an-hour and Jason Carey earned Glossop victory and denied Aquaforce the chance of a fairytale ending to their season.

Shaw Lane could not have done much more over the two games which spanned over 240 minutes.

Last week at Sandy Lane, Craig Elliott chose to match Glossop, who have only conceded ten goals in the North West Counties Premier Division this season, man for man.

That meant a place on the bench for Thornton and without him, Shaw Lane struggled and were lucky to escape with a 2-2 draw – admit-ably in controversial circumstances.

Whilst Thornton was plan b last week, the striker was plan a inside a packed Surrey Street. 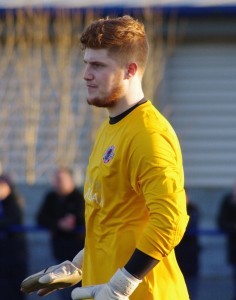 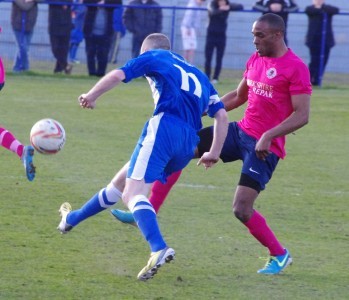 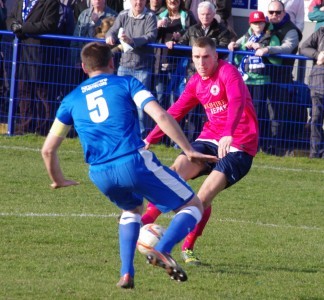 Goal-scorer Joe Thornton goes close in the first half

Instead of sitting back, Shaw Lane tried to take the game to their hosts and the game-plan worked until the closing minutes.

The first half was a tense affair, but both teams did create chances.

Eddie Moran also missed a sitter at the back-post for Glossop.

A rare defensive mistake from Glossop allowed Thornton to fashion out Shaw Lane’s first real chance. The striker broke away and curled a low effort just inches wide of the post from inside the penalty area.

The Toolstation NCEL Premier Division side had to survive a succession of corners at the start of the second half.

Glossop’s hold on Shaw Lane soon weakened and the home side came under a long period of sustained pressure.

Shane Kelsey fired the first warning shot with a powerful volley which made Greg Hall properly work for the first time over two games. 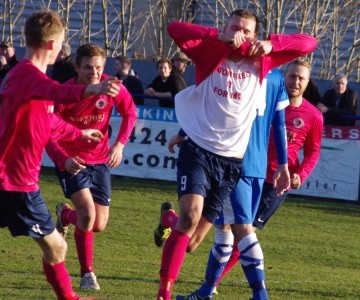 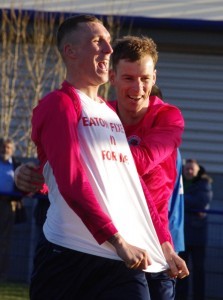 Thornton runs up to his friend behind the goal 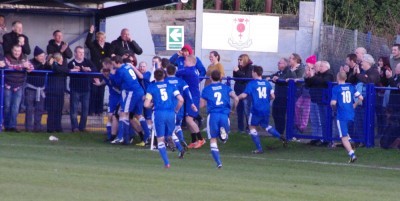 It took until the 78th minute for Shaw Lane’s perseverance to pay off, but Glossop couldn’t argue that it wasn’t coming.

Andrew Fox broke forward and passed to Thornton and the striker sent a low strike into the far bottom corner well out of the goalkeeper’s reach from 15-yards.

Thornton unveiled a t-shirt dedicated to one of the club’s supporters as he celebrated and Aquaforce dared to dream about Wembley.

That appeared to be all Glossop had to offer as stoppage time loomed. Aquaforce were holding their own and the introduction of Richard Patterson had added further bite into the midfield.

But, it was a moment of brilliance from Blackshaw and Hind that pulled Glossop back from the brink.

Blackshaw’s sent substitute Hind scuttling away down the left-wing and as Luke O’Brien caught up with him, the striker had the net bulging with a superb right-footed strike from a difficult angle.

That sparked pandemonium as almost every Glossop player raced to the corner flag to celebrate with a number of subs running 50 yards to join in.

For the first time in the afternoon, Surrey Street was rocking and Gathercole made the save of the match in the dying seconds of normal time by denying Bailey with a thunderous goal-bound attempt. 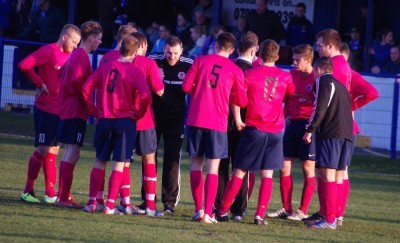 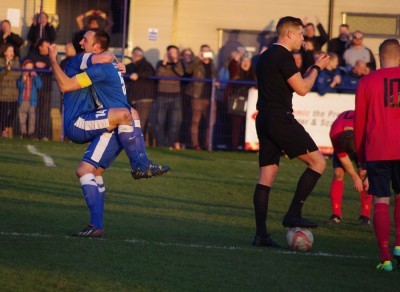 It was Glossop celebrating at the end though

Tiredness clearly affected Shaw Lane in the extra-time and that played a part in the decisive goal as Glossop went in front for the first time in the two matches at the end of the first 15 minutes.

Carey was able to control the ball into the Shaw Lane box and an outstretched leg from Sam Denton wasn’t enough as the Glossop player slid the ball past Gathercole.

Bailey almost added the third goal deep into the extra-time before Aquaforce’s hopes were officially over when Carey grabbed his second.

It was sad end for Aquaforce in the Vase. Their scalps over some giants like West Auckland, Runcorn Linnets and Shildon have helped them capture of the imagination of others in the league and it has been a great experience for the club.

The task for Aquaforce now is to make sure their excellent campaign does not go waste and winning the Premier Division title is the priority.

“It is not a time to pick faults over the goals because over the 90 minutes I think we were terrific.

“We were a couple of minutes away. The game-plan was perfect because we really took the game to them and I think we were the best team over 90 minutes.

“We wanted to take the game to them and we did. We scored at the right time and defended well. When it gets to the last ten minutes you need a bit of luck and we just did not have it.

“Ultimately they had too much on the bench. Their bench changed the game because they had strong legs and pace and they have won the last three rounds in extra-time so it shows they come good.

“We’ll look back with pride at the run and like I’ve said, we are creating our own history. It is a great little bit of history because of the teams we have beaten.

“We have been beaten by good team. I thought they were two evenly-matched teams and all credit to Glossop.”