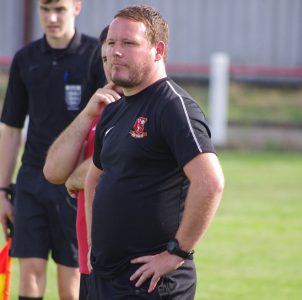 Fox described Clamp’s 30-yard volley – the 95th minute winner in the 2-1 victory – as “outrageous”, but whilst delighted with three points, the Selby boss did admit that side need to perform better in future matches.

“It was amazing really and we did say that because Winterton were down to ten men that we needed to be patient,” Fox told Non League Yorkshire.

“We still wanted to keep the ball and move it quickly to try and move them around, but we said that if the goal doesn’t in the first few minutes (of the second half) that we just keep going and going.

“You have to do that. The Manchester United of old (under Sir Alex Ferguson) used to do it.

“We didn’t anticipate it being in the 95th minute, but we’ll take that and we’re very happy.

“The goal was outrageous. It was one of those where you know it is going in, but you’re waiting for it to hit the back of the net because you don’t want to celebrate early.

“Clampy has that in his locker and when it dropped you’re thinking play someone through, but he thought quickly, saw the goalkeeper off-his-line and his technique was first class.

“The reason he was on the bench was because we wanted more physicality in midfield. He was disappointed to be left out, but he’s reacted in the right way.”

He added: “But I would say we didn’t really create anything and that’s the disappointing bit.

“We got into some decent areas and then we conceded a foul or didn’t get the run of the ball. We were nowhere near our best. We should have created ten or fifteen chances in the second half, but we maybe created two or three.

“We know we need to be better. We’re pleased with three points and the character, but there is stuff to work on.”

Winterton players and management angrily confronted the referee Alex Sawden after the final whistle, with one player somehow escaping a red card.

One of grievances was the amount of time added on. However, Fox agreed that the official was right in allowing for five minutes as there were two extreme cases of time-wasting from Winterton.

“There was the corner where they took forever and then there was the supposed head injury,” he said.

“They can’t complain the referee added on the amount of time he did. He probably played more than he said he was going to, but because of the corner and the head injury, he had to add more time on.

“The referee had an okay game on the whole.”

Instead of folding, Winterton equalised and Fox highlighted the fact that Winterton were reduced to ten men in the first half, but did not play like a team with a numerical disadvantage.

“It was a dream start and then Sam Cable hit the post and if that had gone in, it would have been a different game,” he said.

“We created some more chances and then the sending-off happened. After the red card, you would have thought they had eleven men. They probably caused us more problems with ten men than when they did with eleven.

“Their goal came against the run of play. It was a sloppy goal to concede. That gave them something to hang onto and they came out for the second half and had a real go.

“Peter Lawrie had to be on top form, but that’s what he’s paid to do.”