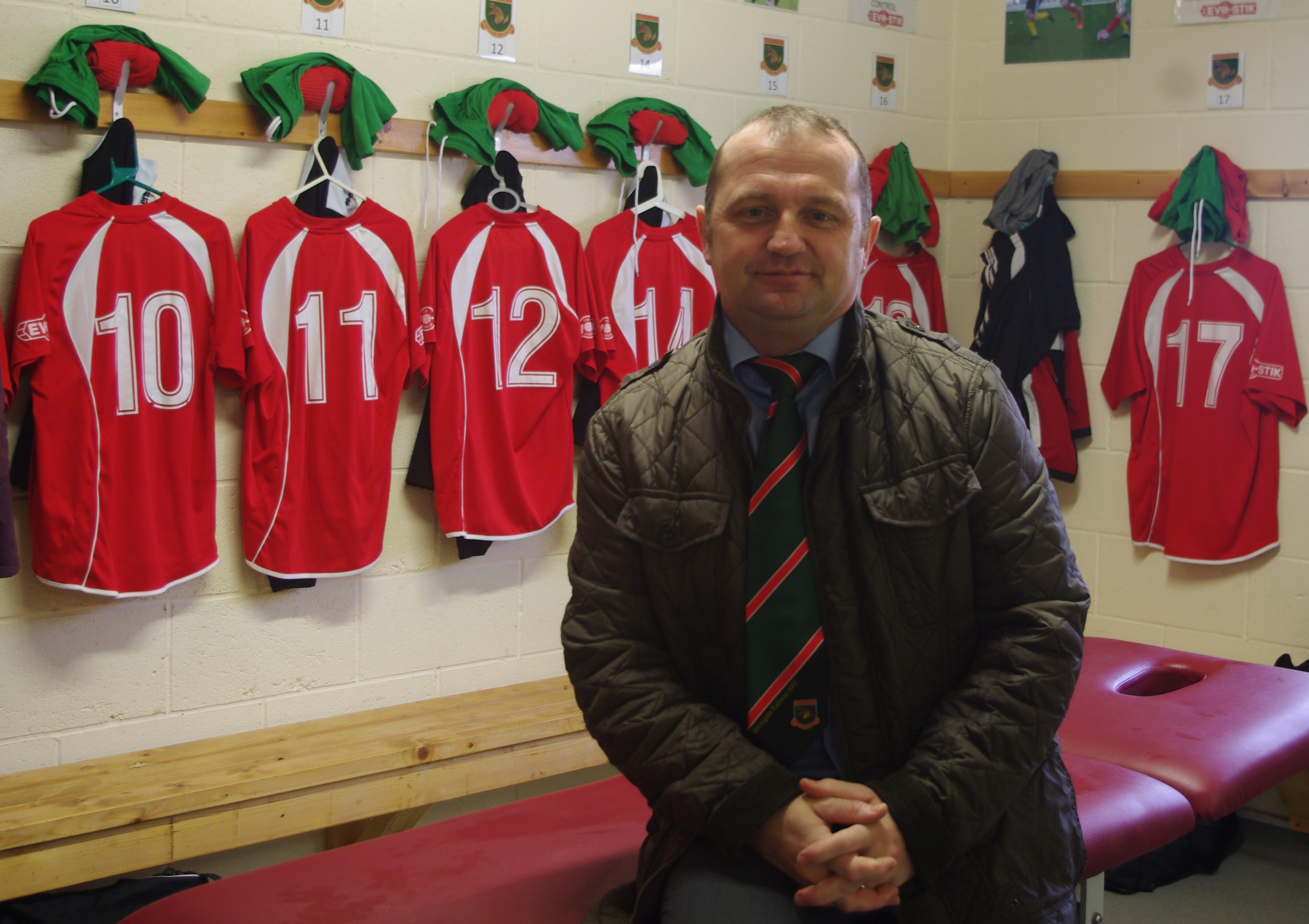 Words and pictures by James Grayson (Twitter: @jamesAgrayson)
With one of the lowest budgets in the Evo Stik Division One North, Harrogate Railway have been defying the odds all season.
Railway, managed by former Liversedge boss Billy Miller, are sitting comfortably in mid-table and for the local derby with Ossett Town yesterday, Miller opened the doors of the Station View home dressing to Sports Performer.
Harrogate Railway are not a one-man band outfit and all about Miller. The Railway boss has a strong six person team of coaching staff all playing a vital role for the club. There is assistant manager Lee Ashforth, a well-known and respected former local goalkeeper. Stats men Richard Lawrence and 18-year-old Danny Openshaw are a major part of the team – Miller describes the latter as having “phenomenal understanding of the game for his age”.
Then there is Bob Moffat, the former Railway reserve team manager, who scouts. Miller has two physiotherapists in Rachel Davis and Jenny Wray.
“Because we don’t have the biggest budget we try and make everything as professional as we can and having the extra bodies around and giving them responsibility makes sure it is not just about me,” Miller says. 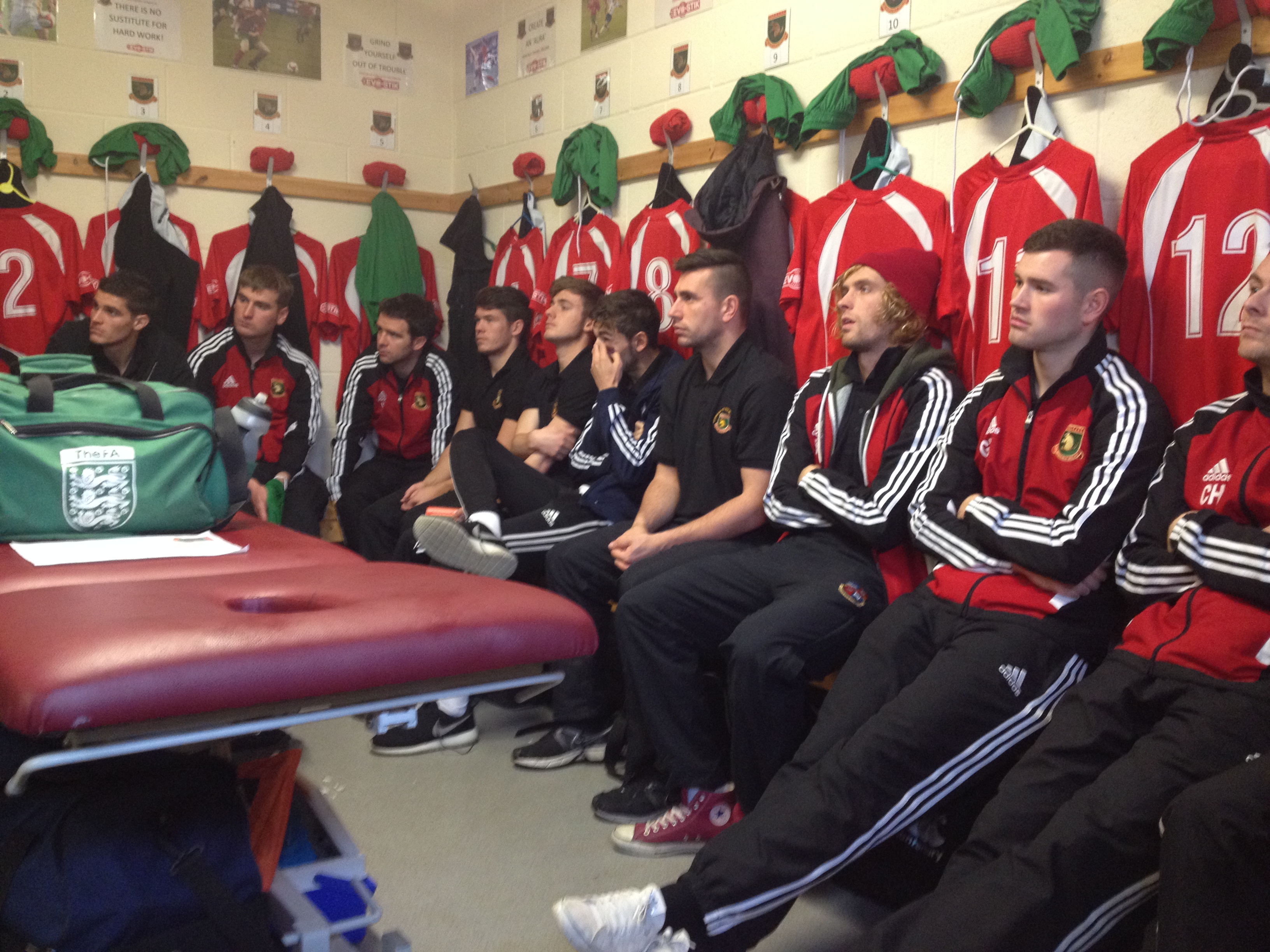 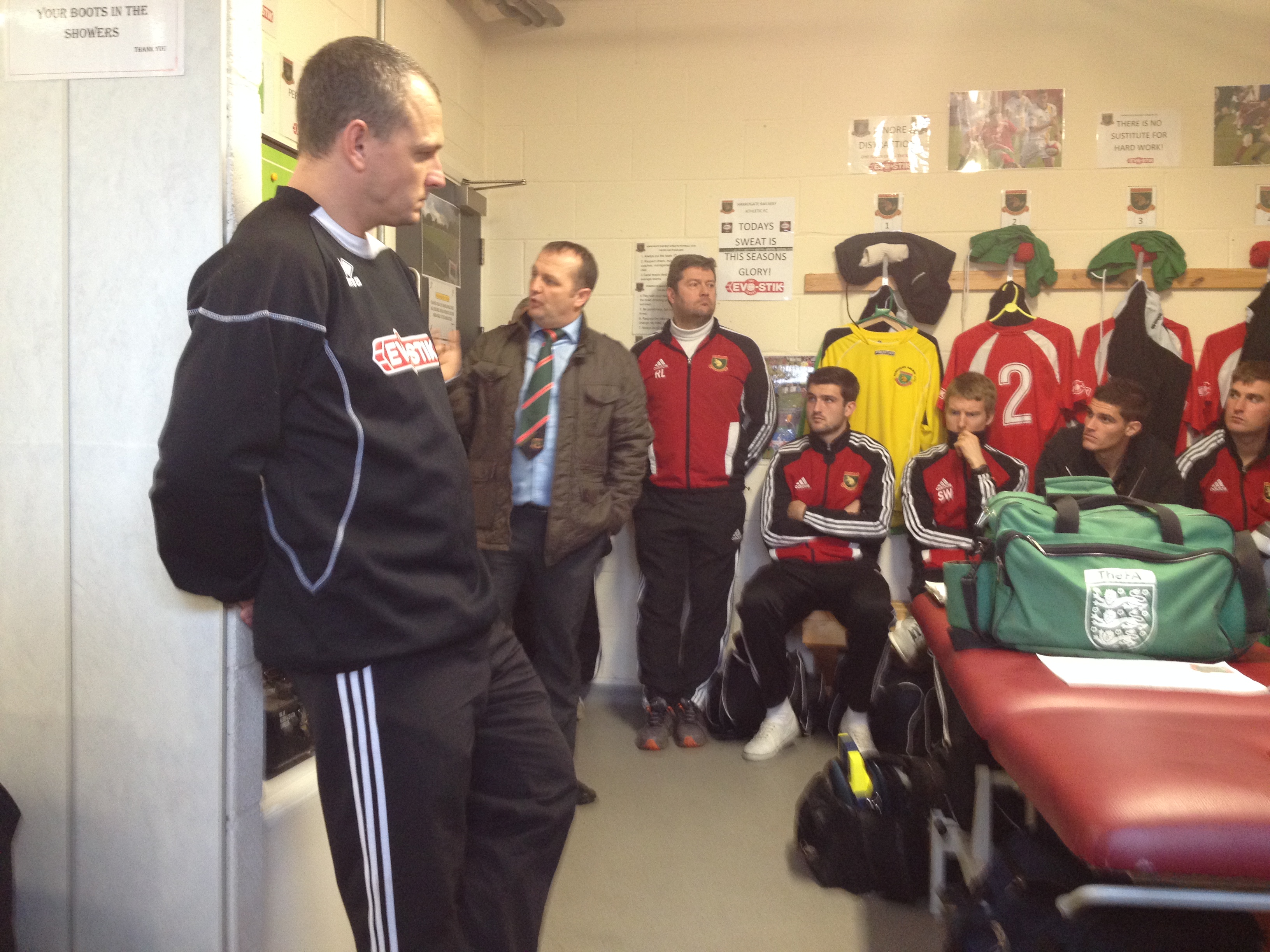 Miller arrives at Station View early for any game, along with his staff to ensure everything is ready for when the players, “a really good set of lads”, according to Miller, start to filter in at 1.30pm. There are faces like veteran Colin Hunter, a former Harrogate Town and Guiseley player, captain Jon Maloney and Railway’s talented midfielder Robbie Youhill.
Youhill signed for Railway last season on loan from neighbours Town and stayed on permanently this year. Youhill is one of many that have loaned or dual-registered with Conference North Town in the last 18 months. Railway’s outstanding goalkeeper Peter Crook is a Town player. Miller claims the special relationship between the two clubs is vital to Railway and adds that Town boss Simon Weaver “has been brilliant to us”.
Big joker Lawrence commands huge respect from the players and he keeps them entertained – Fatlum Ibrahimi’s new haircut is the main topic of discussion. Lawrence claims that he seems to have a new haircut every-week.
Miller, a lecturer at Askern Bryan College, begins his team-talk at just before two o’clock. He goes through Craig Elliott’s Ossett side’s strengths and weaknesses and warns his team not to under-estimate them. “They’re a good team…They went to Darlington and won with a centre-forward in goal and beat (previously unbeaten) Curzon this week,” he tells his players.
Miller finishes his talk by reminding them of how well they have done this season, stating: “You’re in a great position…it’s a great opportunity for ourselves.”
The players head out for the warm-up at quarter past two which Ashforth controls and Miller says they follow “the same ritual every-week, nothing changes”. 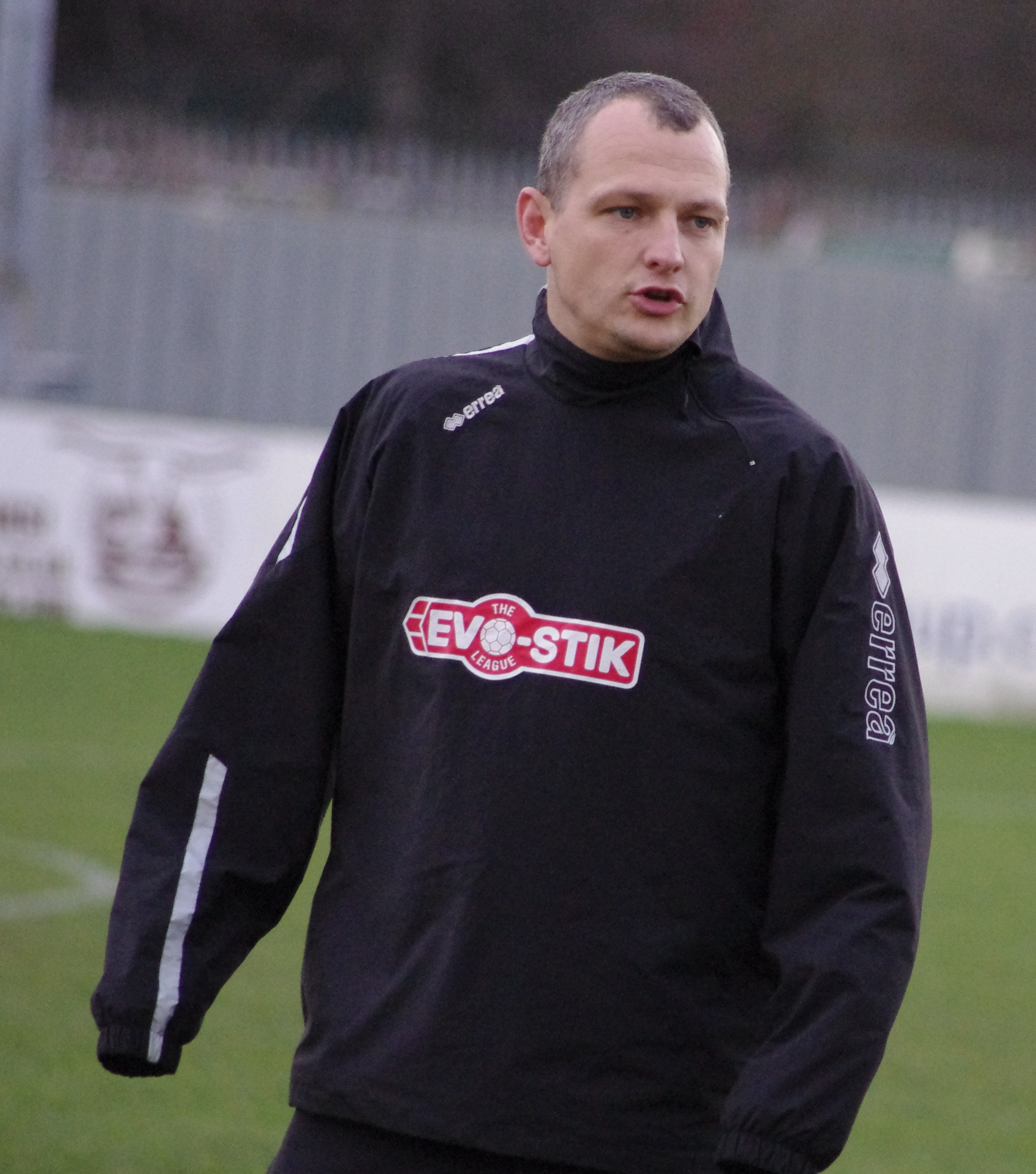 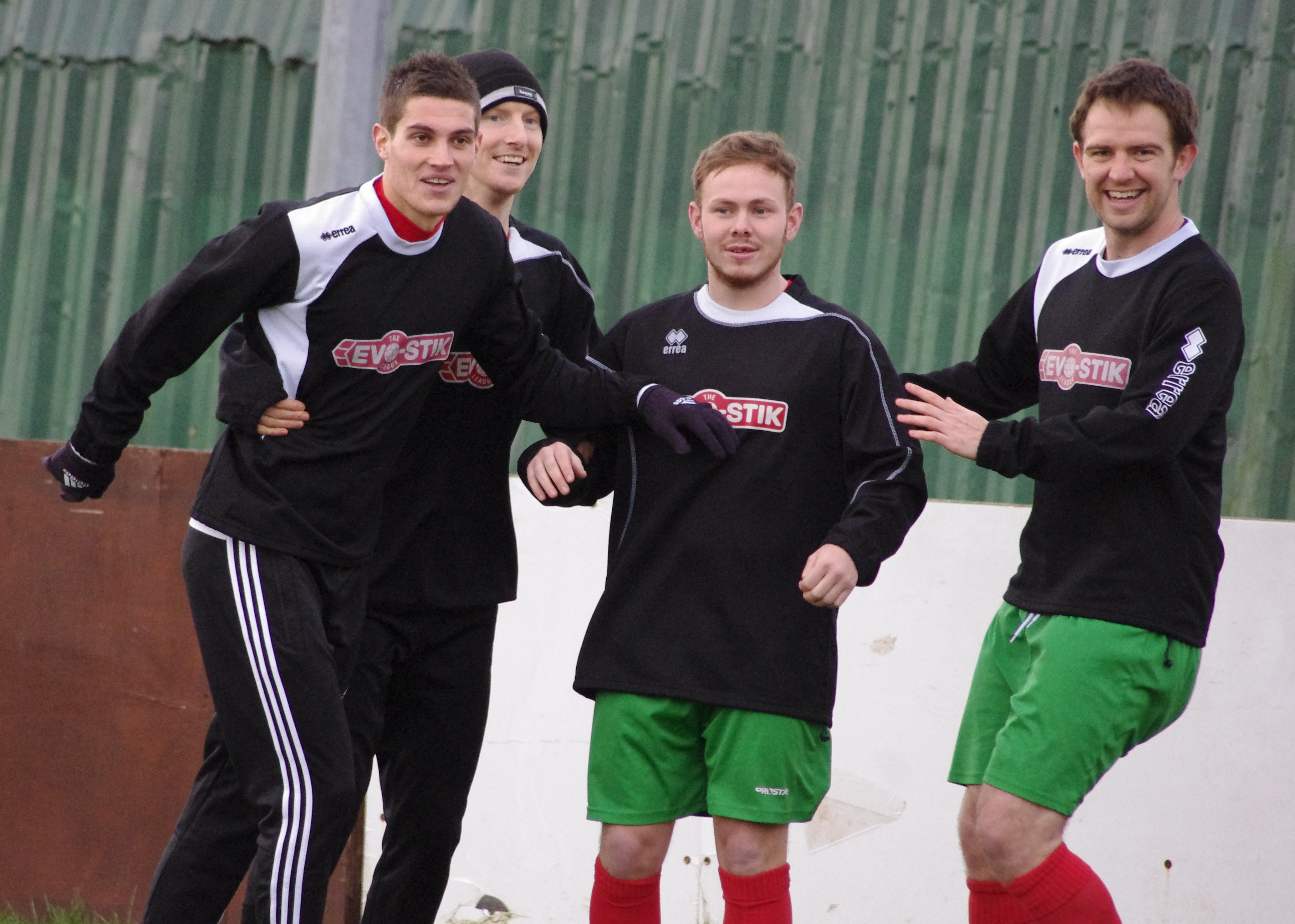 Myself, Miller, Moffat and Openshaw stand on the touchline watching proceedings. Manchester United fan Miller is a big reader and along with Openshaw, he is reading Harry Redknapp’s autobiography – “I read 100 pages this morning,” Miller says. Miller urges me to buy the book and recounts a story from the book involving Redknapp and Barry Fry.
I mention a Brian Clough book I recently read. “Is it called ‘Provided You Don’t Kiss me,” asks Miller. I nod and Miller says: “I’ve read it, it’s a fantastic book.”
Our book reading club is brought to a close when Miller heads inside to get changed with 20 minutes remaining before kick-off. Players soon follow him into the dressing room.
There is a calm atmosphere in the room. No-one is getting over-excited. Players are encouraging each other with shouts like “get an early goal”. Lawrence, who also takes control of the goalkeeping coaching with Crook, goes round handing out the water bottles. Openshaw is tasked with making sure each player is aware of their positions for set-pieces.
Miller has a few brief final points for his players, but the main message is: “Don’t come in at half-time and at full-time with regrets.” 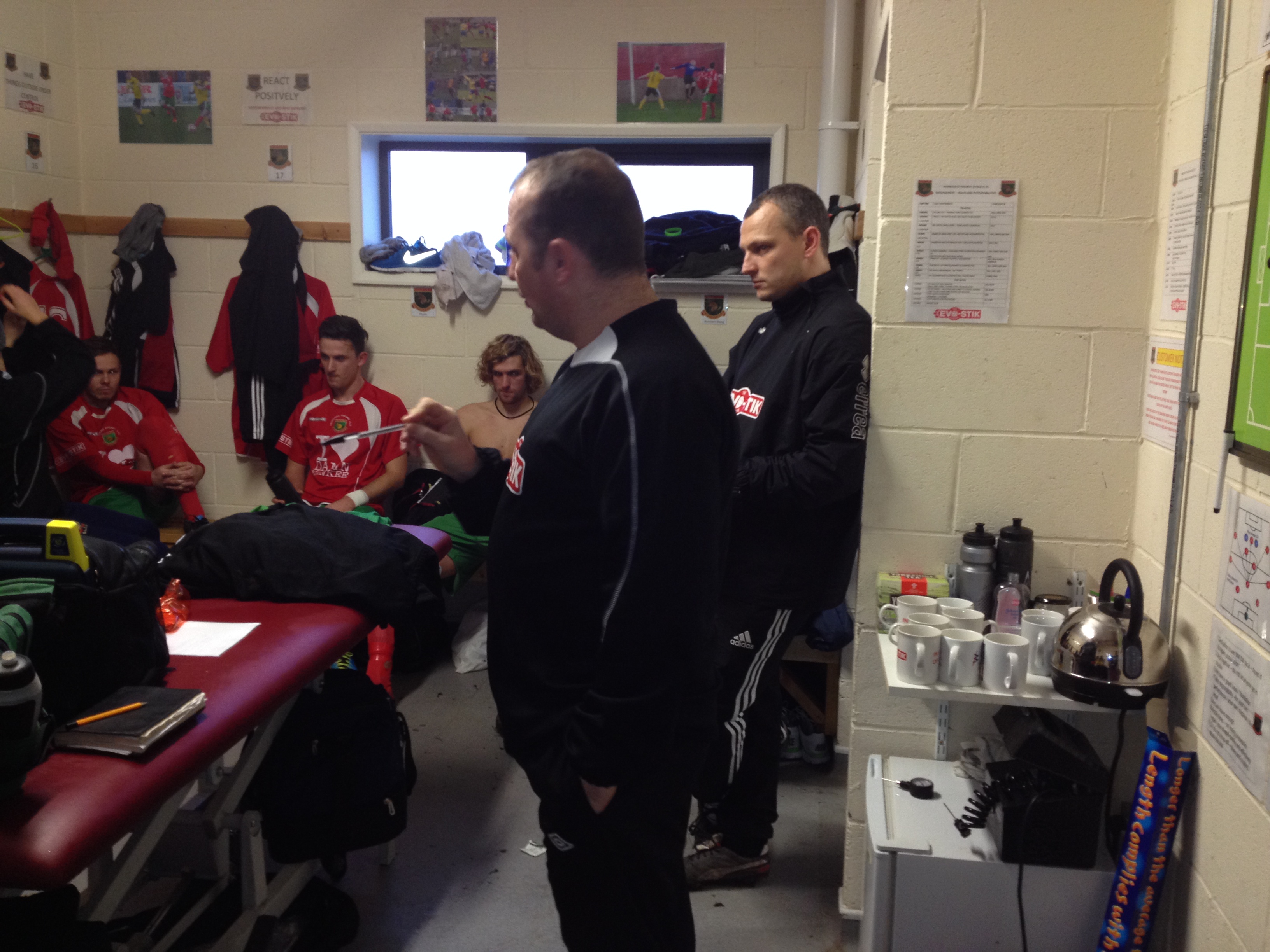 “No regrets”, was Billy Miller’s final message to his players 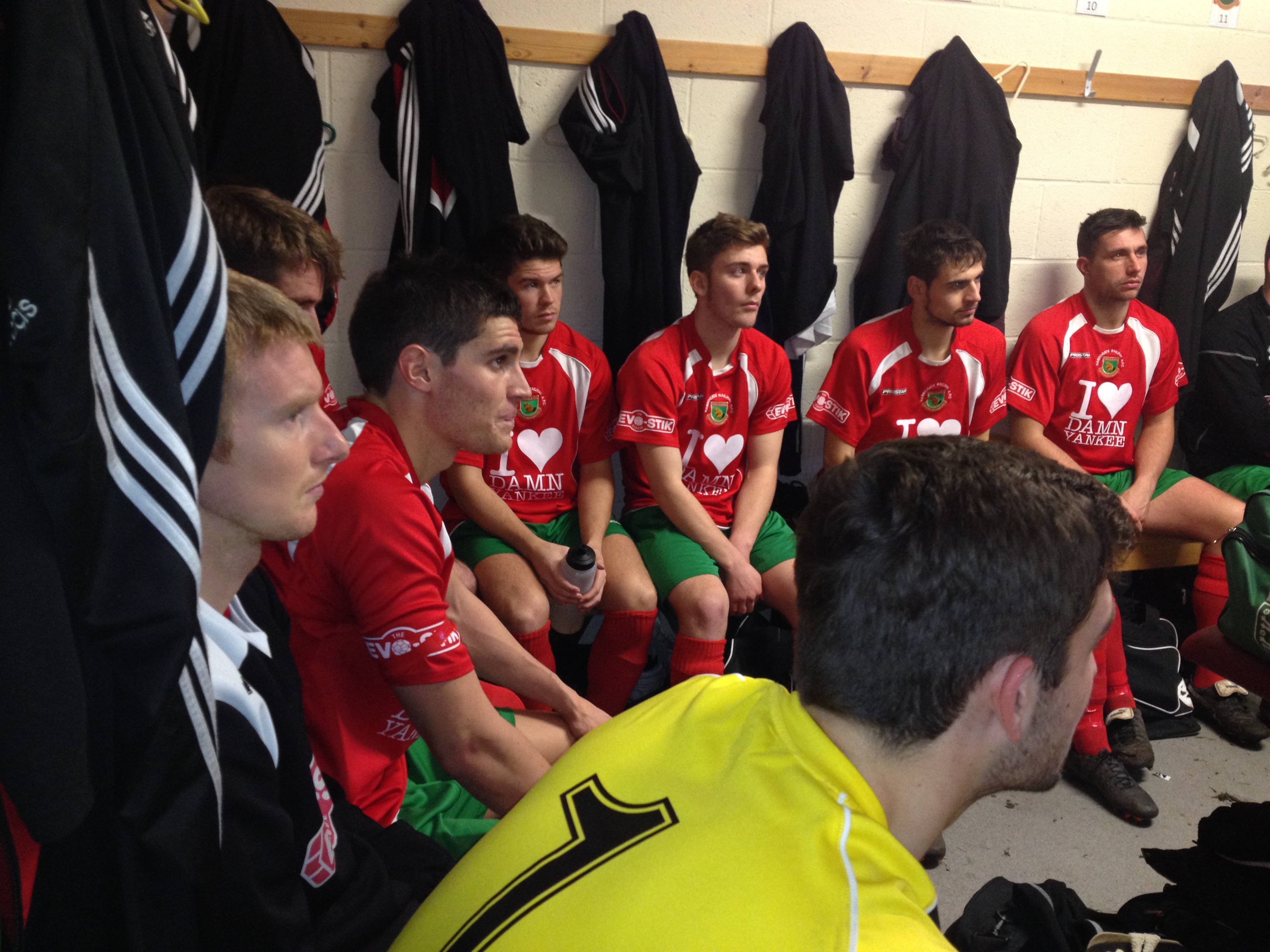 The Harrogate Railway players all ready to take on Ossett 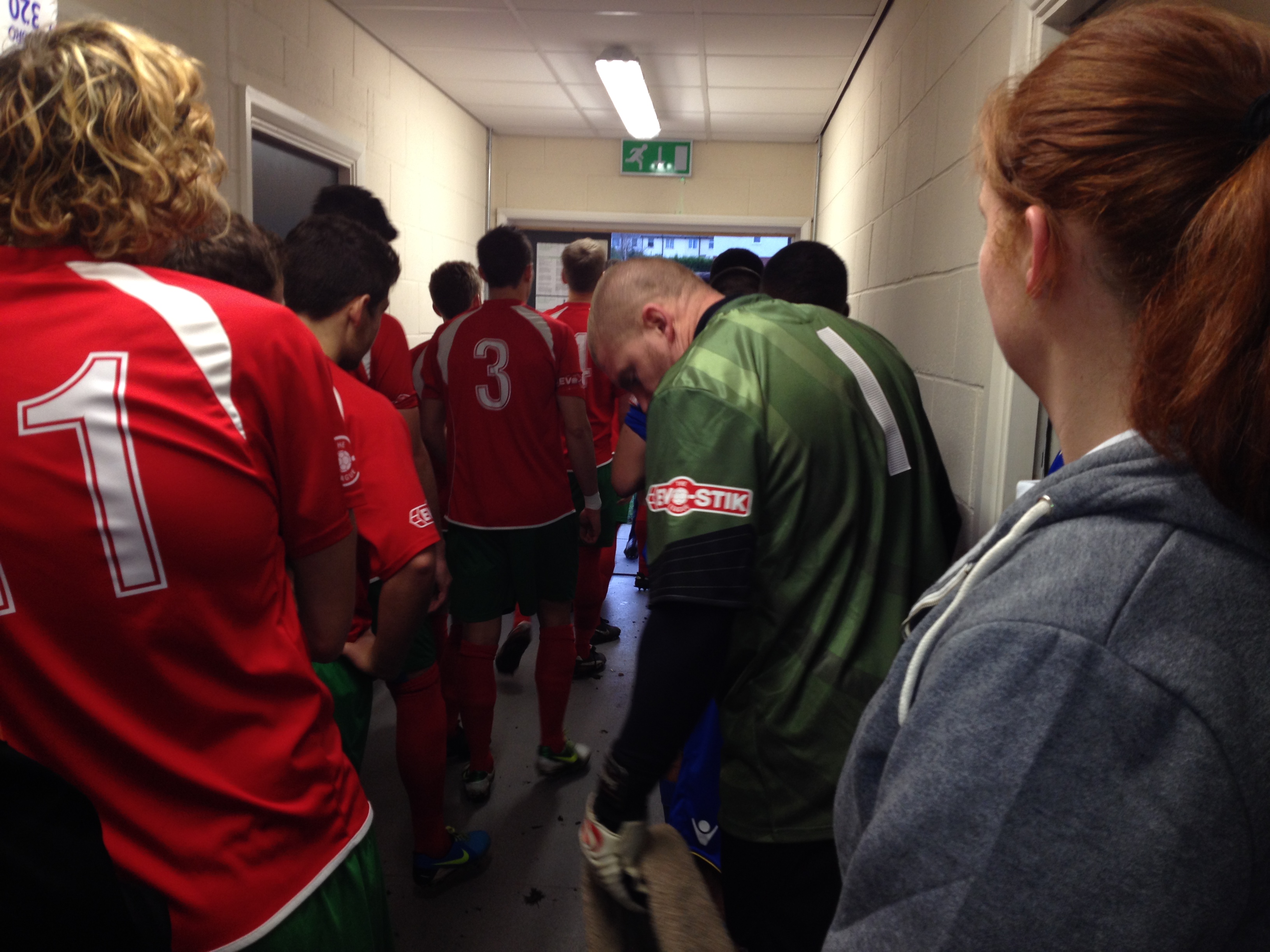 Ready for battle: The two teams in the tunnel

The early part of the game is ruined is by four yellow cards in the opening 12 minutes. Players are afraid to make a tackle as the game progresses. Railway are on the back-foot as the half closes and Crook is called upon to make three good saves.
The players trudge back into the dressing room frustrated. I point out to left-back Lawrence Hunter that Ossett finished as the stronger side. He agrees and says “it will be a different game second half”.
Having the refreshments is the first task. Lawrence has opened the giant box of Jaffa Cakes that club stalwart Dave Shepherd kindly donated and offers an exhausted Youhill a small box. Youhill has his head down between his legs and initially says no. However, he then looks up and says: “Go on then, they’ll do for a Christmas present…it’s that time of the year.” 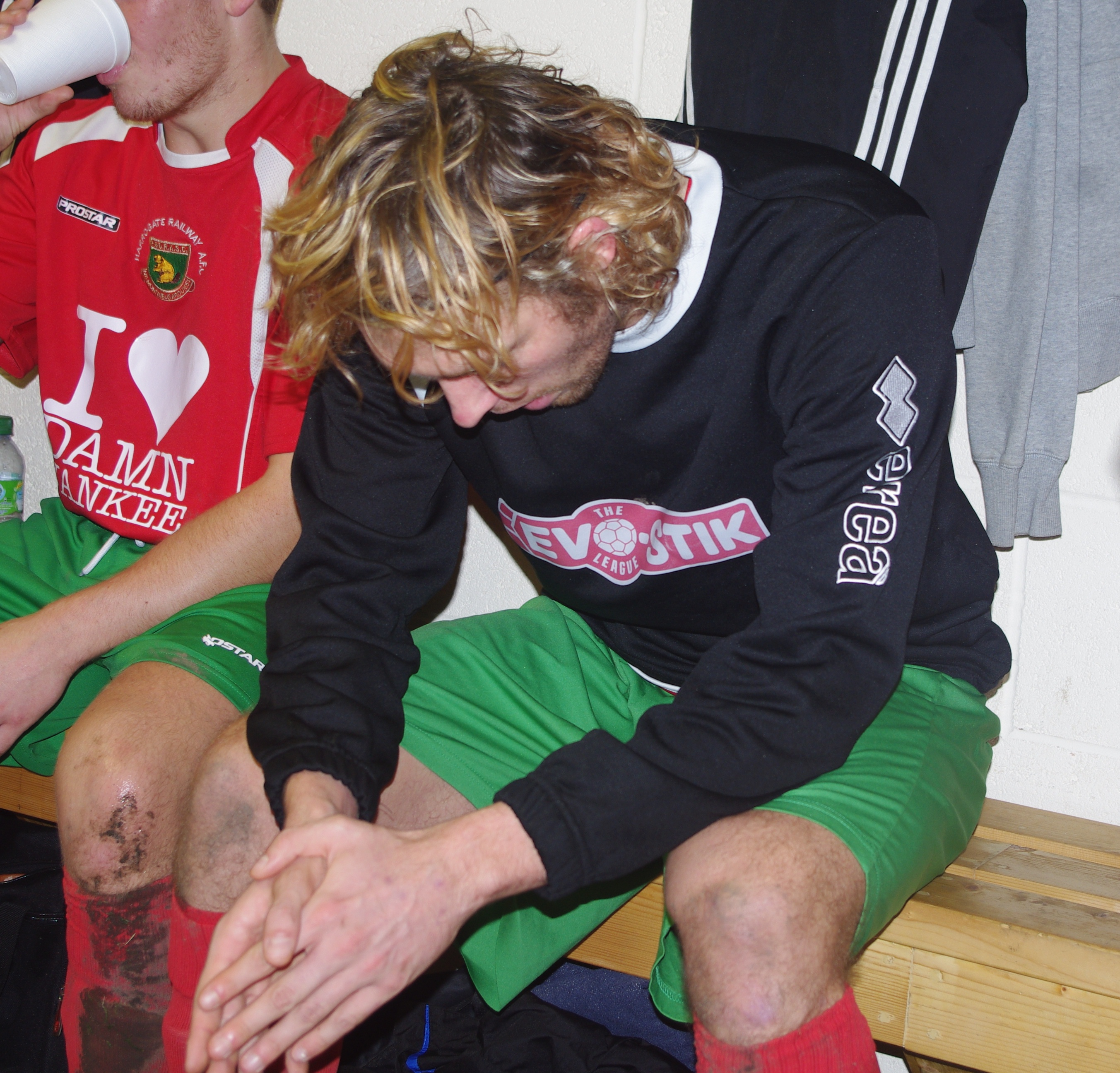 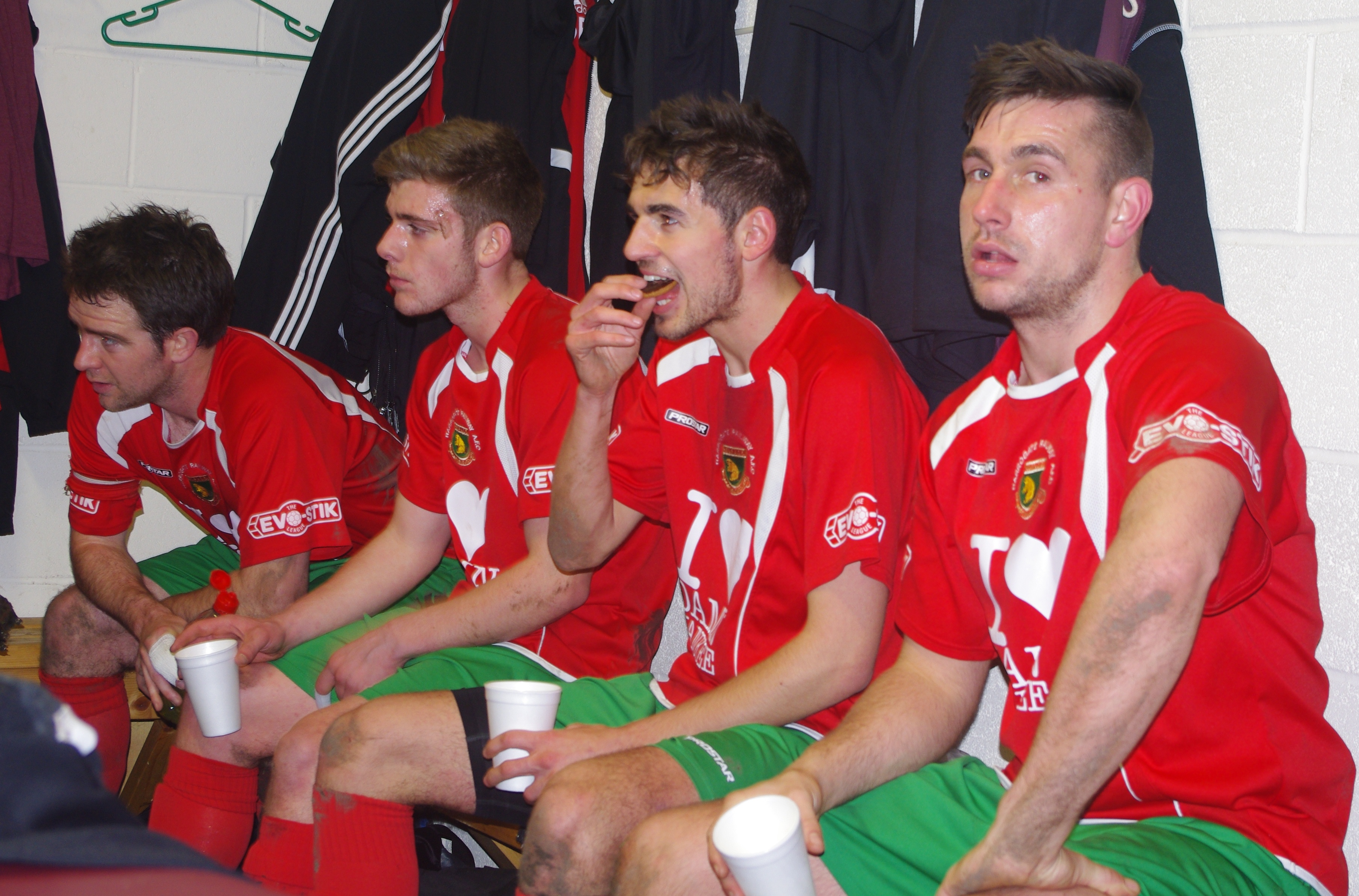 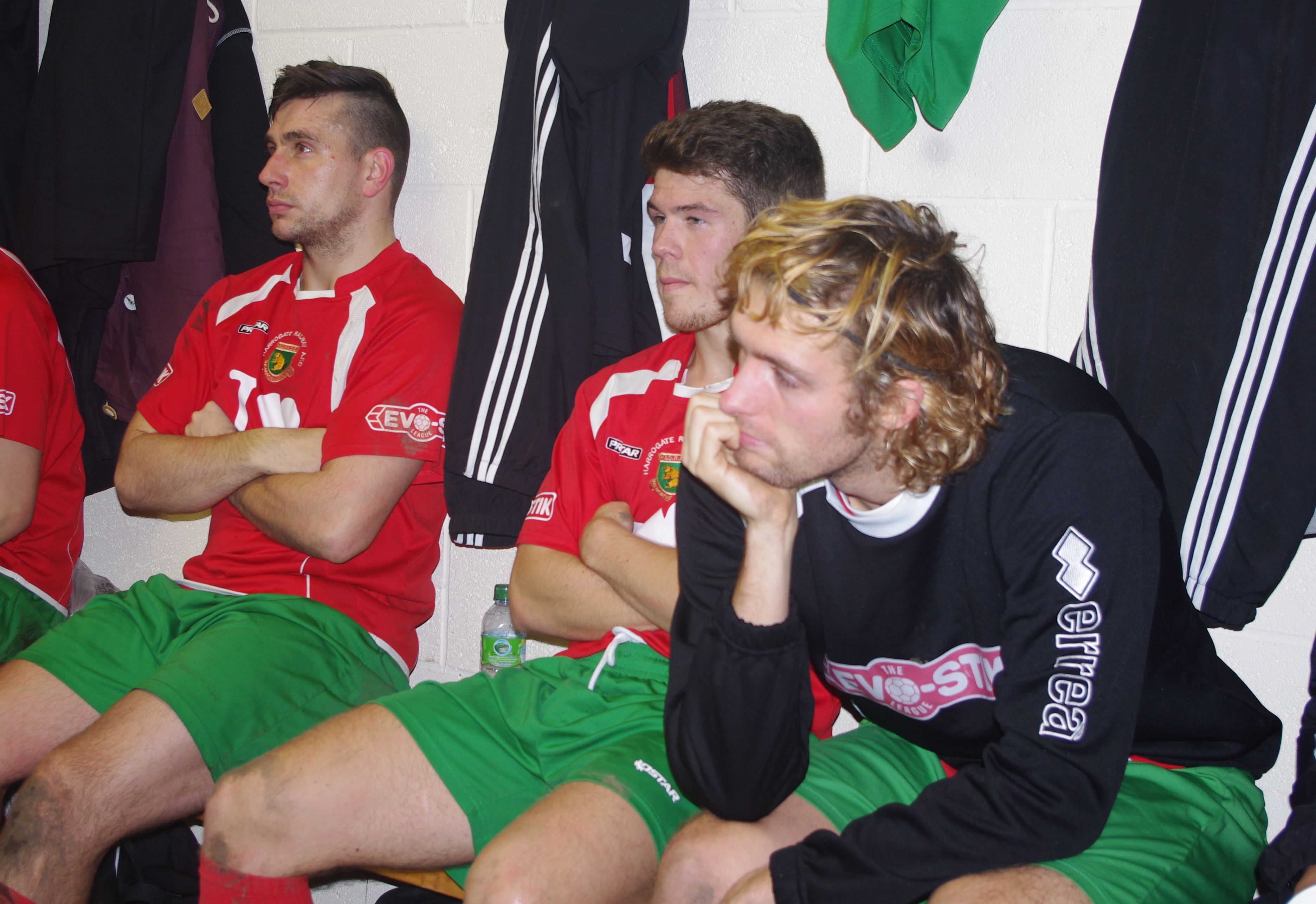 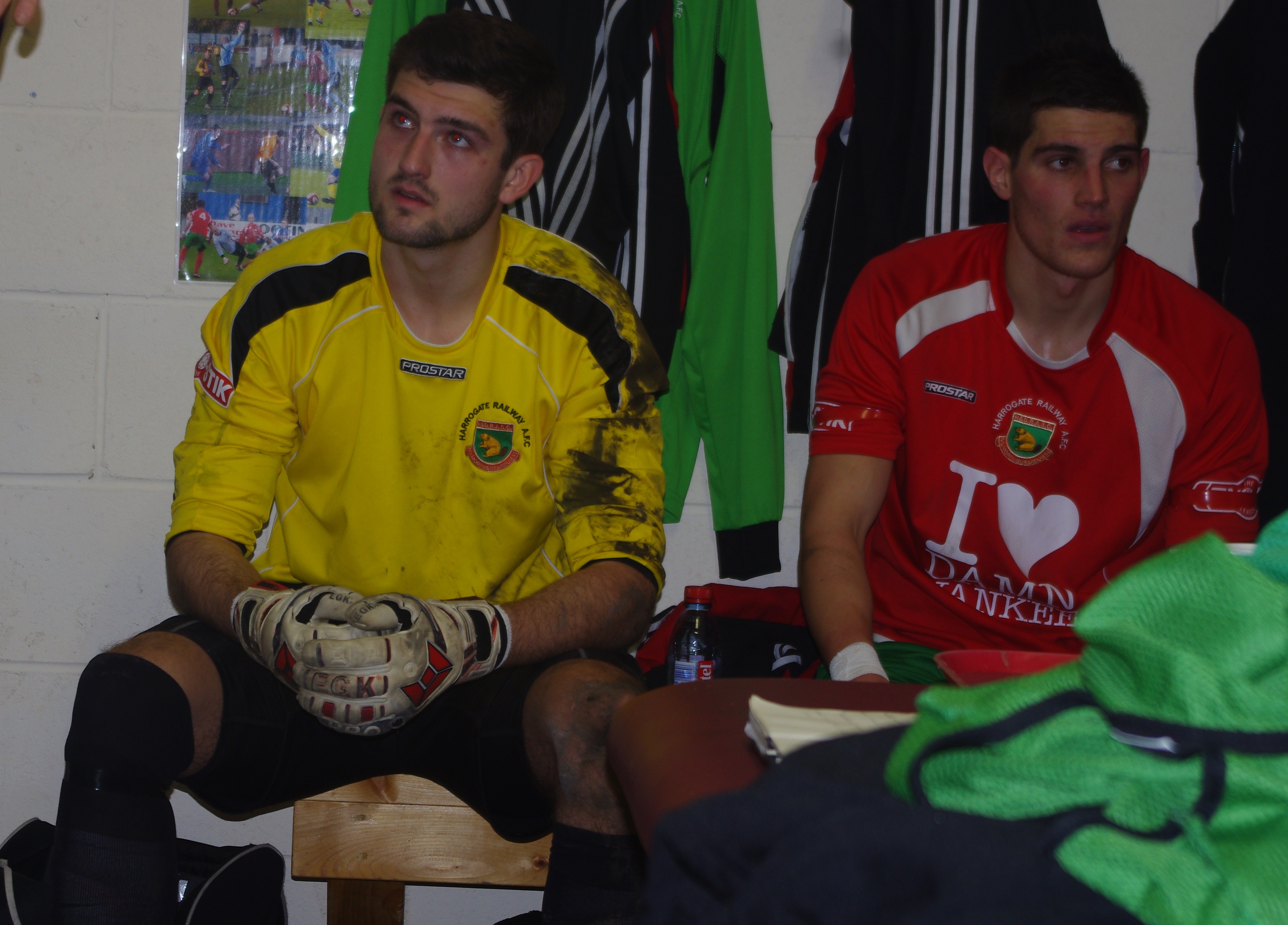 Go win it for him: Billy Miller told his players to earn three points for their goalkeeper Peter Crook

Whilst there is time for humour, the air soon turns serious when Miller enters. He gets the first half stats from Openshaw and then glances at his notebook at few times before addressing his team.
His first concern is the referee’s heavy-handed approach. “I’ve had a word with him and told him he should be man-managing the game,” he states before adding that he reminded the referee that it was a local derby and he should expect the game to be feisty.
“We don’t want nine versus eleven,” Miller warns his players.
With regards the performance, Miller is fairly happy and tells them they had some great possession early on.
Simon Parkes earns some praise from his manager, “you’ve done exactly what we asked of you,” Miller says.
The Rail boss is concerned about Ossett left-back Steven Jeff’s dangerous runs and tells Paul Beesley and Nathan Cartman that “he’s your responsibility”.
“It is even-stevens at the moment,” Miller adds before reserving his final note for his goalkeeper Crook. He reminds his players of the saves that Crook made and says: “I have told you before, he’ll keep you in the game, now go and win it for him.”
That statement alone shows how well the 19-year-old stopper is rated.
However, the second half doesn’t start to plan. Miller is still walking to his dugout and is behind the goal when Ossett take the lead, watching from only a few yards away.
A free kick is taken quickly and Railway are made to pay. Miller makes his way round to dugout and when I say that I didn’t see it so clearly, he says “we only have ourselves to blame”. 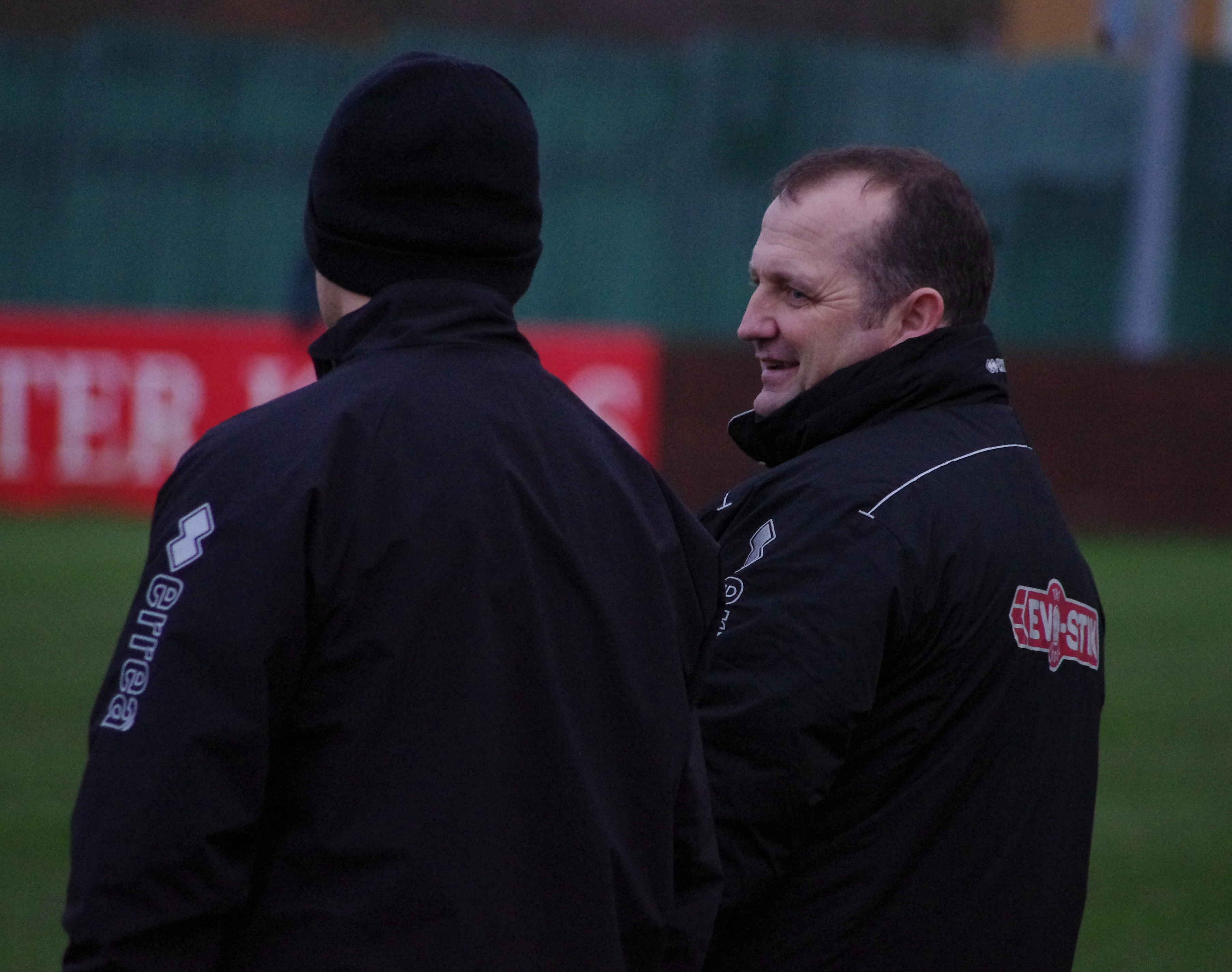 Railway can’t force an equaliser and the players walk into the dressing room clearly disappointed. Miller, who did his full-time team-talk on the pitch, comes in and finds the two Satsumas he had been saving for after the match squashed beyond recognition – Miller looks at me and says, “that sums my day up”.
Harrogate struggled massively for the first part of last season before a great run of form saw them comfortably finish the campaign in mid-table. Now defying expectations, how Miller views a defeat is different.
“Last year we were always looking for the next win and worried about where it was going to come from,” he says, “this year, you’re disappointed because we have a good side and we have worked hard to get where we are.”
Railway are not going to let the result get to them though. A club rule stipulates that all players have to go in the bar after the game and have a drink which they all do.
Miller is not one to dwell or head home and kick the dog either. “I’m going to go home and reflect on the game tomorrow,” he says.
“I will speak to Ash tomorrow and maybe Rich (Lawrence) and Bob and get their reflection on it.
“We’ll talk about in at training on Wednesday and move on.”
It’s not surprising that Railway won’t reflect too much on the Ossett defeat as a trip to league leaders Warrington Town awaits next week. But, Harrogate drew 0-0 at big-spending Darlington so don’t bet against Rail just yet.