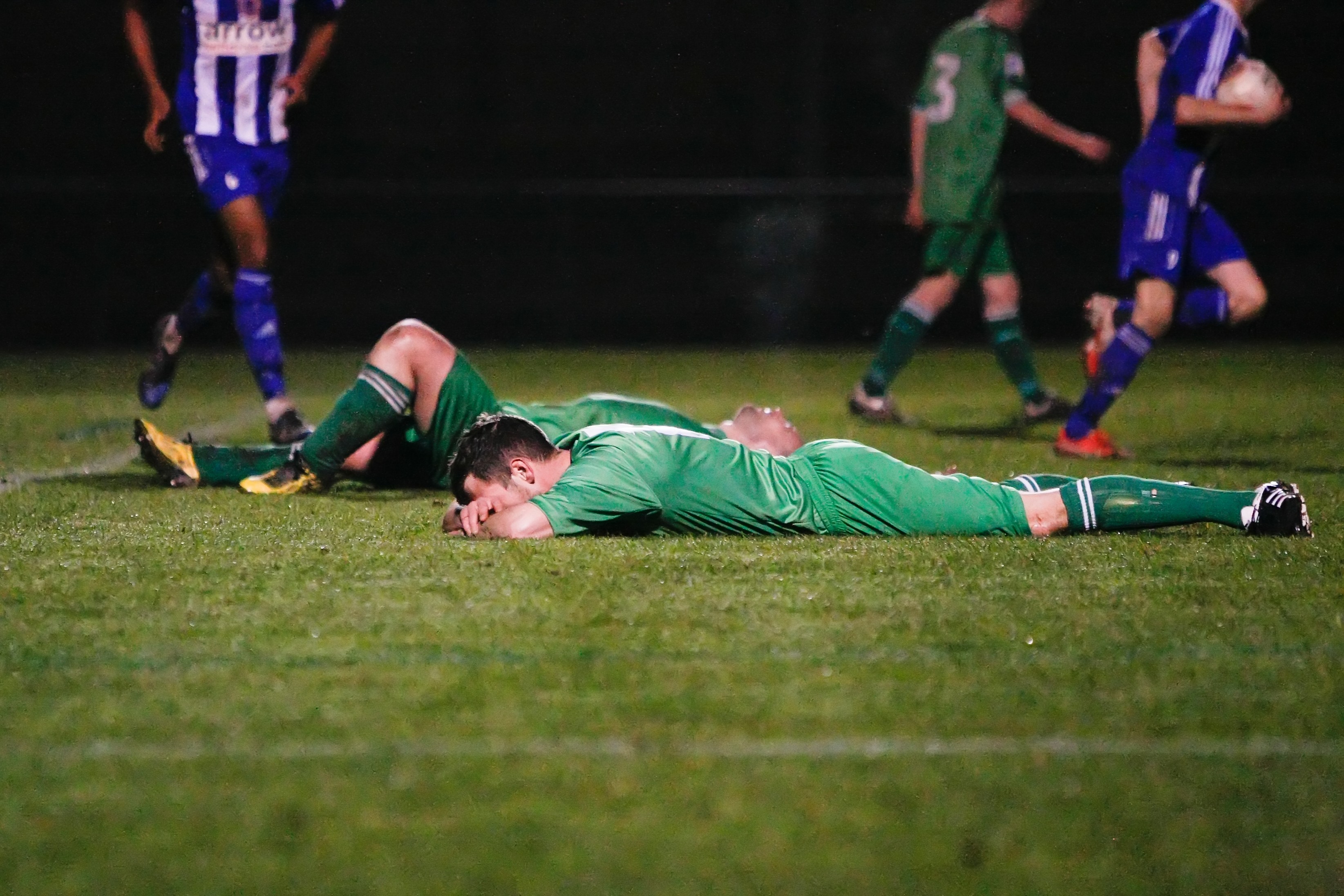 Match Photos are HERE
Just when you thought their promotion hopes were over, an unfortunate 95th minute own goal rescued a potentially priceless point for Shaw Lane Aquaforce.
Aquaforce had thrown away a deserved 2-0 lead and were trailing 3-2 to local rivals Hemsworth Miners Welfare as the memorable Toolstation NCEL Division One clash headed into stoppage time.
A well-organised young Hemsworth side had put in a magnificent performance and were defending heroically as Shaw Lane laid siege to their goal.
They were holding out until Andrew Hart accidently headed the ball into his own net.
The dramatic equaliser set up a further frantic three minutes which even saw Shaw Lane’s John Cyrus see his header come back off the crossbar.
Ultimately it finished a draw and that ensures Shaw Lane still have their destiny in their own hands for their decisive last game of the season with Knaresborough Town tomorrow night.
If Bottesford lose at Dronfield Town tonight then Shaw Lane will be effectively promoted because of their superior goal difference. A draw or win for Bottesford will mean that Aquaforce have to beat Knaresborough to propel themselves into the Premier Division.
Shaw Lane manager Craig Elliott, who went through a full range of emotions on the side-lines said: “I’m not disappointed in the end because it could have been even worse.
“Looking at the positives, it is still in our hands to get promoted, that’s the way you have to look at it.
“Of course I’m disappointed we didn’t win the match. I’m disappointed with how we played after we were 2-0 up. But it is the wrong time of the season to be breaking down performances because it is about results.
“This result keeps our promotion dreams alive.” 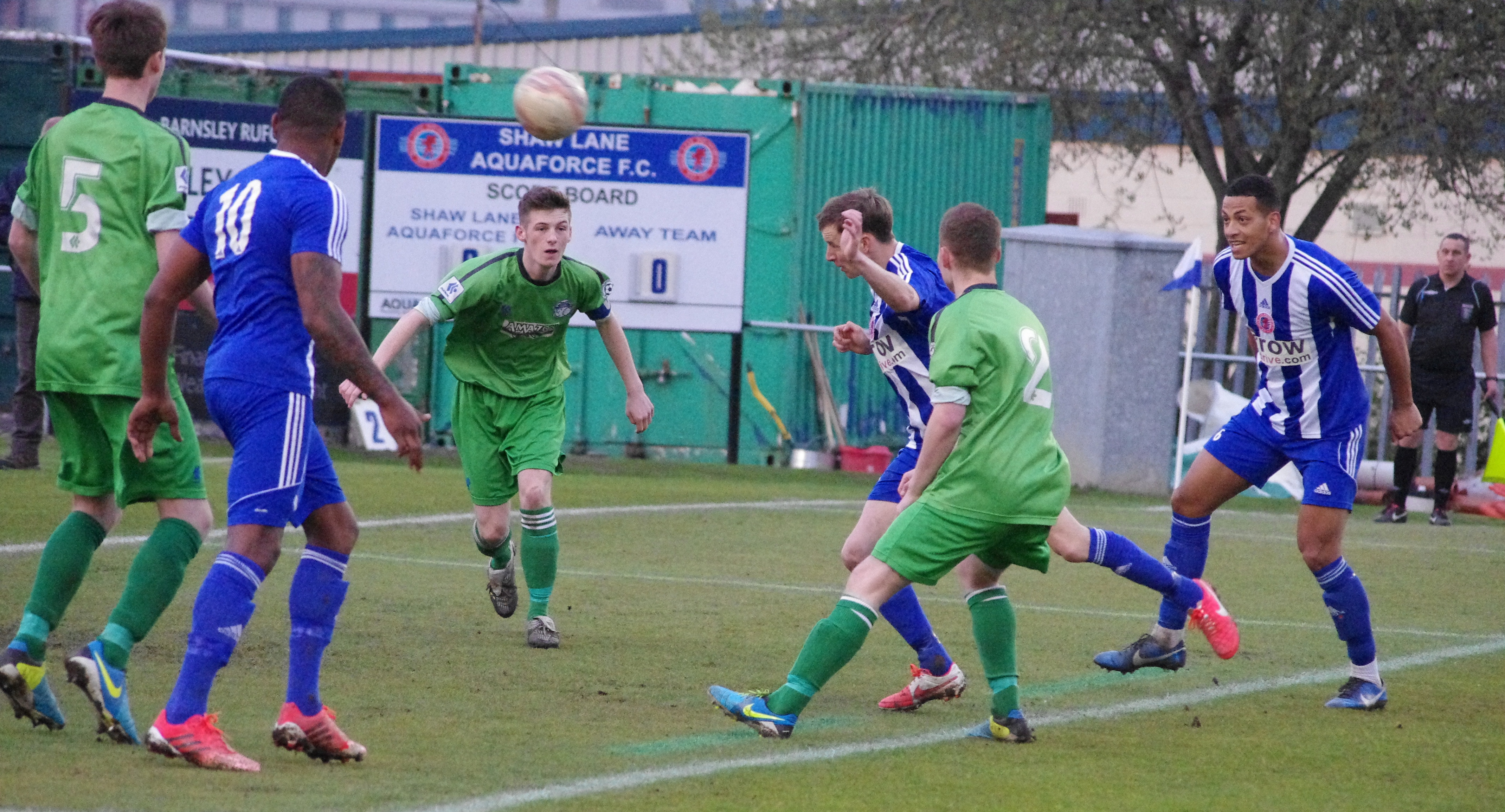 Just like their last two games, Shaw Lane were quick out of the blocks. Only four minutes had passed when the opening goal arrived. A Danny Frost corner found Cyrus. Cyrus headed the ball down towards Danny Patterson. The former Ossett Town midfielder crossed the ball towards the six yard box and Shane Kelsey was there to head Shaw Lane in front.
By the 20 minute mark the match as a contest looked over. James Burgess had crossed for Frost to score with a well-taken low finish and Hemsworth appeared dead and buried.
The fight-back began quickly. Jason Yates pulled one back with a deflected long range and soon after the half hour mark, Wayne Benn’s men were level. Goalkeeper Jamie Green’s horrendous clearance came back at him and Nick Guest lobbed the ball over him for the equaliser.
Hemsworth were all over Shaw Lane and half-time couldn’t come quick enough for the home side. 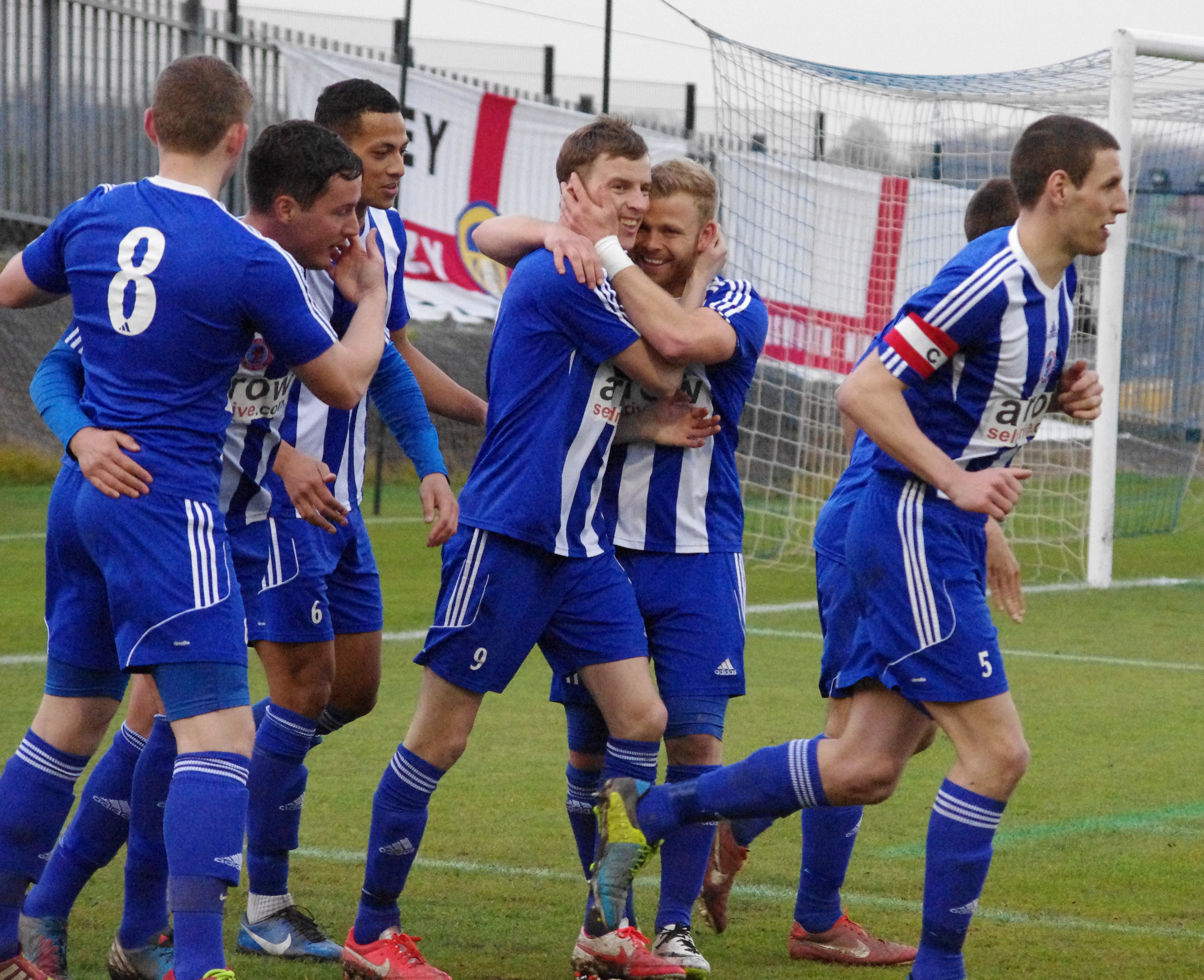 Tension filled the ground and Shaw Lane began the second half like the first, but couldn’t find the breakthrough. Hemsworth looked good on the break and on the hour they won a penalty.
Chris Fawcus made a needless foul on former Shaw Lane player Nash Connolly and Guest sent the penalty down the middle of the goal to rip Shaw Lane’s script up.
The last 30 minutes could be described as the defence of Alamo from Hemsworth’s perspective. Whilst goalkeeper Jamie Oddy was only tested on a few occasions, Shaw Lane still put them under real pressure and Hemsworth handled the heat well.
Substitute Kane Reece and Frost had notable chances, but until the equaliser, the best opportunity was in the last minute of normal time. Hart headed the ball off-the-line and then youngster Bradley Kerr blazed it over from close range.
Hope looked gone, but because of injuries, substitutions and time-wasting there was still plenty of time to snatch a point.
If Shaw Lane go onto win promotion, this moment will go down probably as the most important one along with Cyrus’ equaliser against Cleethorpes.
By now Aquaforce were launching the ball into the box at every turn and that’s what forced the equaliser.
Jason St Juste crossed from the left for Frost, situated inside the penalty area. Hart got there first, but because Oddy had raced out, the defender’s header flew past the goalkeeper and into the net.
Hart and right-back Matthew Stor collapsed to the floor as Hemsworth did not deserve such heartbreak considering their team had put in.
Cyrus, Frost and Kelsey quickly collected the ball as one last attack was still possible. The home side won a corner and then another one and it was from the second Frost corner that an unthinkable winner was nearly scored.
Cyrus rose to head against the bar before the final whistle was finally blown after a full eight minutes of added time.
Hemsworth fully deserved their point and it was a lucky escape for Shaw Lane. But, there will be no second chances tomorrow night – only a win will do when Knaresborough visit.
Shaw Lane Aquaforce: Green, Stohrer, Fawcus (St Juste 81), Swift (Reece 8), Danville, Cyrus, Patterson, Haigh, Kelsey, Burgess (Kerr 81), Frost. Sub unused: Grace.
Hemsworth Miners Welfare: Oddy, Stor, Clark, Dixon (Turner 66), Viggars, Hart, Connolly, Yates, Guest, Phillips, Dawson (Lowe 82).
Referee: C Unwin (South Yorkshire)
Ref Rating: 5/10
Attendance: 123
Man of the match: Harry Viggars (Hemsworth Miners Welfare)