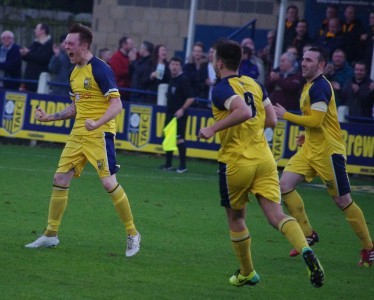 Liam Ormsby smashed Tadcaster Albion into the FA Vase third round with a last gasp penalty to earn his side a deserved 2-1 win over Morpeth Town.
The second round tie was heading for extra-time until a needless challenge saw double goal-scorer Ormsby given the opportunity to score the winner from 12-yards for the second week running.
Ormsby made no mistake by hammering the ball into the right-hand top corner to cue scenes of jubilation around i2i Sports Stadium.
The fact that another half-hour was on the agenda was quite remarkable considering Tadcaster’s domination in a one-sided game.
Northern League outfit Morpeth had set out to defend and Tadcaster completely controlled possession.
Morpeth did create the first chance and Taddy had a lucky escape. Sean Taylor was given a free run down the left and he was able to shoot past the advancing Tom Morgan – the winger was only denied by Matt Sparkes’ smart header to clear the ball off-the-line.
The Toolstation NCEL Premier Division leaders began to exert their control on the game without reading testing visiting goalkeeper Karl Dryden until the opening goal on 35 minutes.
Out of nothing, Ormsby fired a tremendous shot into the top corner from 30 yards to put Taddy ahead – a goal of exceptional standard.
Tadcaster had the game in the palms of their hands and they only needed the second goal to finish Morpeth off.
Calum Ward went close before Morpeth capitalised on a rare mistake to equalise through Jordan Fry on the hour mark.
Morpeth had showed no desire to attack and even after the equalising, the visitors were settling for extra-time.
Tadcaster goalkeeper Morgan was a mere spectator. 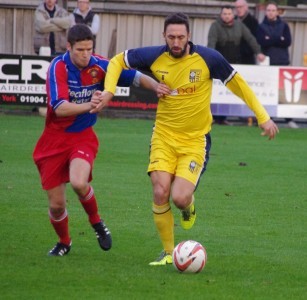 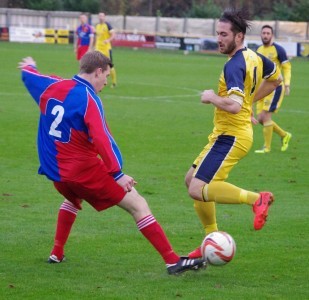 However, the home side struggled to break Morpeth down and rarely tested Dryden – despite the amount of time they had on the ball.
Ormsby and former Manchester United midfielder Jonathan Greening never lost the ball once, but actual shots were few and far between.
The stage was set for extra-time until Morpeth orchestrated their own downfall.
Tadcaster had plenty of joy down the right-wing and George Bissett had made his way to the penalty area with the ball at his feet when Taylor carelessly pushed him to the ground.
It was the easiest decision referee Andrew Dunne has had to make this season and the official pointed straight to the spot without hesitation.
So Ormsby was again the chosen one to be the hero – a week on from his last minute penalty to secure a 2-1 win over Albion Sports – and the net was soon bulging.
The game had gone for Morpeth, who brought two coaches to Tadcaster, and the day was compounded in the dying seconds.
Keith Graydon, the scorer of Spennymoor’s winner in the 2013 Vase final at Wembley, was sent off for a second bookable for his foul on substitute David Brown.
Morpeth management and players charged towards the referee Mr Dunne upon the final whistle, ferociously finger-jabbing.
But the official was completely correct with his decision and Morpeth should look at their own performance.
The visitors showed no desire to win the match and Tadcaster deserved to march on towards Wembley – regardless of the fact they needed a last minute penalty.

Tadcaster Albion manager Paul Marshall:
“We didn’t look after the ball in the final third as we should have done.
“We got a great goal through Liam Ormsby and I didn’t feel threatened as it didn’t look like they were going to score a goal.
“I thought it would be a case of when we got our second. We missed a great chance at the start of the second half and if that had gone, we probably would have the game by three or four.
“A silly free kick and eventually it went into the box and poor defensive positioning from a couple of defenders allowed them to get the goal.
“We had the most play and we were the dominant team and I think we deserved to win.
“But, you always a bit lucky when you get a ppenalty in the last minute.
“I was preparing for extra-time. I’d said to (subsitute Nick Thompson) Thommo, ‘go and tighten it up and make we don’t do anything stupid’.
“He went on and told them not to panic and ‘we’ll go to extra time if need to.
“I’m just chuffed to get through and to be a Northern League team which is always difficult to do.”
On the penalty: “I never watch penalties.
“I was in (ex-player and scout Paul James) PJ’s chest with my head down and he just went ‘get in’.
“It was a great relief and obviously Liam has pulled us out with two penalties last weekend and he’s done it again and he’s great player.”

The full album of match photos will be posted onto Facebook page this afternoon.