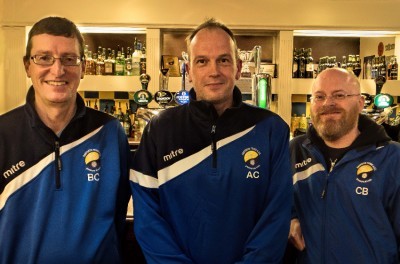 The pair have provided Costello with players to help the Miners field a side after it was decimated by a heavy wave of departures to Ossett Town.

To complete the signing of McMillan, ex-Policeman Costello also had to perform an early morning raid on Pickering boss Marshall’s house.

Costello told Non League Yorkshire: “Marshy has been really good and so has Lee Ashforth from Harrogate Railway.

“I’m getting loads of help and the thing is that it isn’t going to be a quick turnaround.

“When six or seven players leave and with the situation unclear on the captain (Andy Hawksworth), it becomes difficult.

“Without help from people like Marshy and Lee Ashforth, we would have been struggling for players.

“With regards to Harry McMillan a few weeks ago, I had to get him signed by the eleven o’clock on the Friday before the Parkgate game on the Saturday.

“I got Harry’s signature on the Thursday night and then travelled from Hull to York on Friday morning to Marshy’s house at 9am.

“All the curtains were shut and this bloke came down still rubbing sleep out of his eyes and I said ‘Marshy I need you to sign this and use your fax machine’.

“I said to him: ‘are you alright mate? Have you just got up?’ I didn’t realise that he had been working until 2am in the morning.

“I used his fax machine and if I could have got away with it, I would have used his scanner!

“It was like ‘thanks Marshy, go back to bed son’. You need people like that and people like him are the bred and butter of this sport.

“If you don’t have people like Marshy to help you out then you’re going to find it impossibly hard.”

After three weeks in charge at the J.S. White Community Stadium, Costello is starting to get his feet under the carpet.

Although he has yet to taste victory in the Toolstation NCEL Premier Division, he is content with displays from his patched-up side.

However, he does want to get on the training ground to solve problems that he has noticed – including something he picked up on during the defeat to Pickering in midweek.

“We’re looking for training facilities and the owners looking to support us so we can put things that are wrong, right on the training ground.” he added.

“We know what is wrong, we just haven’t had the time to put it right as we have also played Saturday-Tuesday-Saturday-Tuesday for the last few weeks.

“I’m not too disappointed because the performances and commitment from the boys has been superb.

“But, we need to get on the training ground to paint pictures in the players’ mind so when ‘this happens, this is what we want you to do’.

“On Tuesday night, you could quite clearly see that one ball down the side brings out our centre-half to cover and the gap between our next centre-half and the full-back is too big.

“We have to put that right.”

Garforth are due to travel to Armthorpe Welfare tomorrow