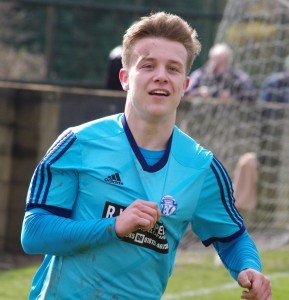 If that is the only game that Nick Guest plays for Hemsworth Miners Welfare this season and the Wells go onto secure promotion, the striker will still go down as a major player in their success.

Prodigal son Guest, back as a special ‘guest’ star, single-handedly pulled the Toolstation NCEL Division One leaders out of the fire, capping his heroic display with the 96th minute winner against a crestfallen Grimsby Borough, who were experiencing deja-vu symptoms.

The striker and half-time substitute had leapt into the crowd four minutes earlier, thinking he had rescued just a point with a 30 yard bullet that levelled it at 2-2.

The writers of Roy of the Rovers would have been proud of such a grandstand finish of epic proportion and Hemsworth may well look back upon their unlikely, but deserved win in a few months time and hail it as a decisive moment as promotion rivals AFC Mansfield and Bottesford Town dropped points.

Guest, after scoring 38 times for the Wells last season, left Fitzwilliam for the bright lights of the Evo Stik in the summer. After a short spell with Farsley Celtic, the young forward now plays for Goole, whose match with Leek Town was postponed in the morning.

Despite frost wiping out most of the fixtures elsewhere, Hemsworth were confident that their pitch would be playable by kick-off which it duly was. Guest, fortunately dual-registered, got the call from manager Wayne Benn and he duly turned up to help the Wells extend their unbeaten league run to 17 games.

Since his exit, his ‘former’ team-mates have continued the momentum from last season and only Mansfield have beaten them in league action. The Wells have put nine past Hall Road, hammered Worsbrough 8-1. Few have caused them too many problems, although improving Grimsby are an exception. 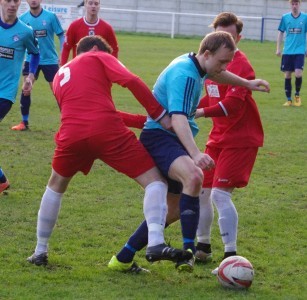 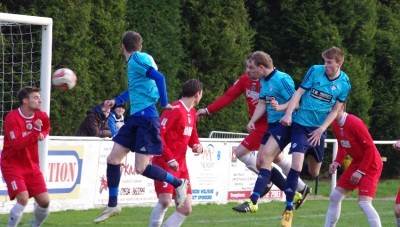 Grimsby prevented Hemsworth for scoring more than one until the bitter end because last ditch tackles, blocks and goal-line clearances 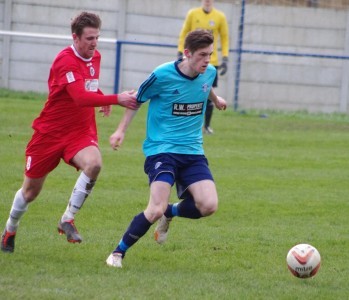 Cameron Clark on the attack for Hemsworth

Grimsby were a struggling side when the Wells had to come from two goals behind to win at their place in October. The equaliser and winner were scored in the final ten minutes so history slightly repeated itself.

Hemsworth had their work cut out that night against a totally different Grimsby side so when lethal striker Jamie Coulson capitalised on poor defending twice to give the visitors a solid lead, manager Benn must have feared the worst. Especially since Grimsby were unbeaten since the appointment of Paul Walden in early November.

The home side’s response was magnificent and how Grimsby held out for so long was remarkable as Hemsworth dominated from the moment Coulson grabbed his second. Cameron Clark’s audacious crossbar-hitting attempt was the opening gambit of a siege that lasted over an hour.

Guest, introduced at the interval, initiated the route back for Hemsworth. His speed and canter down the right wing 11 minutes into the second half was too much for Grimsby’s defence. A pass into the feet of Bill Law was perfect for Hemsworth’s top goal-scorer to turn and fire low and hard past Grimsby goalkeeper Scott Drury.

The fight-back did not go exactly to plan as Grimsby somehow held on. The next 30 minutes was full of last ditch tackles, blocks, goal-line clearances – most notably from Law’s pile driver that was destined for the top corner.

Hemsworth appeared to have run out of ideas as Grimsby took the ball into the far corner in the first minute of five signalled added minutes. Even the brilliant leveller was conjured up out of nothing as Guest had little options for a pass as he moved forward. So like all predatory strikers, he chose to shoot from quite some distance. Goalkeeper Drury stood still as the ball flashed past him and nestled in the top corner. The bar side erupted and Guest sprinted away to jump into the euphoric home support.

A minute and a booking later, Guest and his colleagues were hunting the winner. Grimsby had first go as Coulson was denied his treble by goal-preventing save from Chris Snaith, a stop that made up for his mistake for the second Grimsby goal.

Play immediately swung back downfield and Guest made himself the hero with a captivating looping header that many had thought had gone over the crossbar.

Grimsby players sank to their knees, while all connected with Hemsworth punched the air knowing how pivotal the victory could be.

Hemsworth Miners Welfare manager Wayne Benn: “I think it was written in the script for Nick to do that.

“We put in a lot of time into Nick’s development last year and we dual-registered him this year in the event that he could come and help us out if a game didn’t conflict with his parent club.

“It is the first time we have been able to use him, but I think he has shown his quality and dug us out of a hole with two good finishes.

“But it is not just about Nick and I’m so proud of the lads because they could have dropped their heads at 2-0 down.

“Wins like this can give so much belief and confidence and it means we go into two difficult games against promotion rivals in really good heart and fettle.”

Nick Guest last played and scored for Hemsworth in the 2-0 win at Winterton Rangers – the final game of last season.

Hemsworth have only lost once this season in the league – a home defeat to AFC Mansfield back in September.

Grimsby’s last victory at Hemsworth was in December 2013 – that finished 3-2.

Young defender Jack Steers was captain for Hemsworth in place of the unavailable Jason Yates.

Grimsby were unbeaten since the appointment of Paul Walden in early November.

One thought on “Special ‘Guest’ star is the hero for Wells”