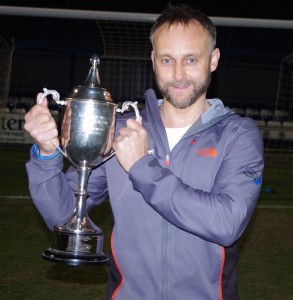 Promotion-chasing Shaw Lane Aquaforce have been ordered to change their name in time for next season by the Evo Stik League.

The ‘Aquaforce’ part of their name is against the FA’s kit and advertising regulations which stipulates that the name of a sponsor must not be in the title of a club at Northern Premier League level and above. The league only realised this at the end of last year.

The Barnsley-based side have until June 1st to inform the relevant authorities of their new name.

Craig Wood, the owner of Shaw Lane and Aquaforce Plumbing Solutions, had hoped the league’s failure to implement their own rules last summer would buy his club more time. However, his attempts to reason with the NPL fell on deaf ears at a recent meeting in Cheshire.

“I don’t have a problem with changing the club’s name, but I feel we should have been told about this rule before we joined the league,” Mr Wood told Non League Yorkshire.

“We spent a sizeable sum of money on merchandise last summer. That will now go to waste. What do you say to all our 22 junior teams who bought Shaw Lane Aquaforce kits? Anybody who is involved in junior football will tell that kits don’t come cheap.

“I think it is disappointing. I tried to get the league to give us another year with the Aquaforce name because of the financial outlay and the fact they didn’t tell us this last year, but it was a definite ‘no’.

“In some respect we have been victims of our success because of how quickly we have moved up the football pyramid. If there is a positive, it gives us the chance to give ourselves a more localised name.

“I do have a few ideas and we will be discussing them at the next board meeting. I’m also welcoming suggestions from supporters.”