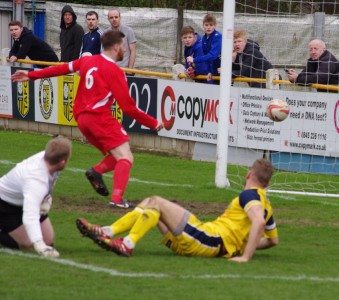 Turning point: Handsworth goalkeeper Archie Sneath was sent off for a challenge on Tom Corner just before Richard Adams scooped the ball off-the-line

Living up to its humdinger billing, Handsworth silenced the home support with Jon Froggatt’s early goal. That kicked Tadcaster into gear with Josh Greening striking twice. Sneath’s dismissal, a decision that will be talked about for months in NCEL circles, soon came, giving Parramore too bigger mountain to climb.

Tadcaster’s big victory puts them a point clear of Handsworth with a game-in-hand, but the next few matches will decide how crucial it will be.

Handsworth are firmly still in the race, especially when you consider that it was Mick Godber’s first defeat since taking over as manager – an unbeaten run that lasted 17 matches.

The first ten minutes underlined why Parramore have been so hard to beat under Godber. The pressure was all on Tadcaster as they needed to win more than Handsworth and Billy Miller’s men appeared nervy. The Brewers were living on the edge in the first 60 seconds as defender Gaz Griffiths rattled their cage during indecisiveness from the home defender. His effort was unconventionally blocked by goalkeeper Gary Stevens.

Parramore were straight back at Tadcaster, this time deservedly taking the lead. Danny Buttle was given license to do whatever he wanted down Tadcaster’s right side. He crossed and amazingly no-one picked up Jon Froggatt at the back-post. The 33-goal hit-man was never going to miss after being given so much time and space. 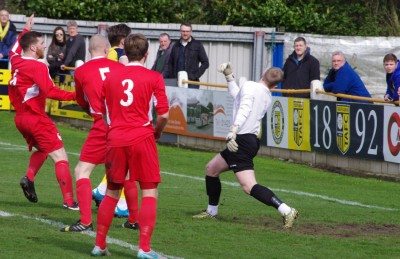 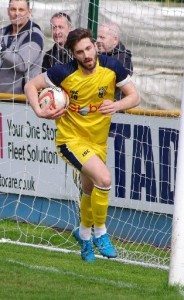 Greening went onto complete his hat-trick 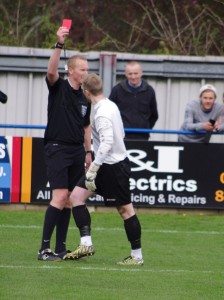 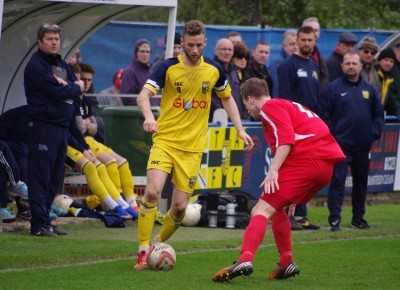 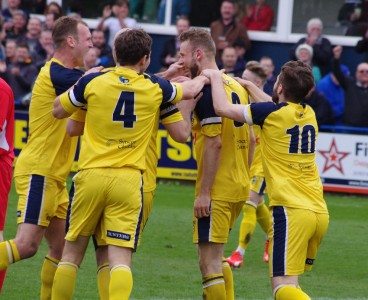 Tadcaster hit back, scoring two quick-fire goals through Greening, who last season struck a hat-trick against the Ambers at Sandy Lane. Rare poor defending from Parramore saw the former Pickering striker score his opener from close range. For the second, he broke clear of their back four.

It was wide open until half-time approached. The decision to send Sneath off will go as the most controversial decision of the NCEL season, if Tadcaster are crowned champions. Contentious doesn’t quite cover it as although he did bring down Tom Corner, the striker had already shot for goal. Parramore captain Richard Adams scooped the ball off-the-line, but referee Mick McGrath still deemed that Sneath had denied an obvious goal-scoring opportunity.

Parramore’s 17-year-old outfield player Tyler Bates bravely put his hands in the air and volunteered to go between the sticks. His first job was to pick Corner’s spot kick out of the net.

Manager Miller was still walking to his dugout from the changing rooms at the start of the second half when Corner put the game further beyond Parramore with a header.

Simon Harrison reduced the deficit and gave Parramore hope with an exquisite free kick on the hour and for a brief period, the visitors looked capable of a comeback to end all comebacks. Tadcaster’s defence was certainly rocking as an almost killer shot across the six-yard and then harmlessly out for a goal kick.

Tadcaster would have only had themselves to blame too if Handsworth had mounted a comeback as Carl Stewart broke clear twice, Bates denied him once. The other saw Stewart put the ball wide.

The Brewers eventually struck the fifth. Jason Mycoe’s long range bullet was initially saved by Bates. However, the ball came loose and Greening was ready and waiting to complete his hat-trick.

Tadcaster came off triumphant, but this race is far from over, especially with the way Handsworth played in the second half in testing circumstances. The full ramifications of this result are yet to be revealed.