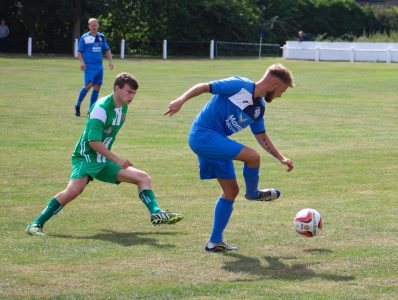 Chances were limited in the first half, but all five goals were scored in a pulsating nine minute period in the second half. Lewis Pickering and Jack Knight gave Welfare the lead.  Michael Tunnacliffe gave the visitors hope only for a Wayne Hughes own goal to give Welfare the edge. They were able to hold on even though Dan Stocker hit a second for the visitors from the penalty spot.

Play got underway in the heavy rain and Welfare soon came close when Knight saw his snap shot deflect of Stocker for a corner. Pickering then saw his lob clear the crossbar.

Graczian Klimzak had an effort saved by the feet of Adam Ledger and the same player later broke through but was again foiled by the foot of the keeper.

The second half opened with the visitors forcing an early corner and then at the other end Kyle Willis forced Ledger to a low save at his near post. Klimzak then headed a corner over the bar as Welfare looked for the opening goal.

That goal came on 55 minutes when Pickering beat the offside trap before running on and calmly slotting past Ledger for his first goal for Welfare.

A minute later they got their second when Knight picked up a loose ball and he ran in to beat Ledger with a shot into the far corner.

Two minutes later Emley pulled a goal back when a soft free kick was conceded on the edge of the Welfare penalty area and Tunnacliffe drilled his shot  past Zaniewski.

Another two minutes went by before a 20 yard shot from Klimzak struck  the ankle of Hughes and careered into the net as the unfortunate Ledger dived to his left.

Once again Emley came back and another Tunnacliffe freekick saw Zaniewski sprawl to his right to push the ball away.

On 69 minutes Emley got their second goal when Stocker beat Zaniewski from the penalty spot after Matt Cunliffe was adjudged to have fouled Ben Burnett in the penalty area.

Welfare held on and in the final minute Jordan Townend hit a decent chance over the bar and then Matt Semley appeared to be fouled in the penalty area but was yellow carded for simulation.

“Really pleased with the performance today .Going forward we moved the ball really well and pleasing to see us holding the ball under pressure and created some very good chances. We did make hard work of the game at times and a couple of rare errors today nearly cost us a much deserved win.

“The winning margin could have, and should have been more comfortable with a very soft penalty against us and a stone wall penalty not given for us,  but I guess these things equal themselves out over the season.

“Emley were very dangerous from set pieces due to their height advantage but our back four dealt with the threat very well. A  good weeks training  this week and I’m sure all will be looking forward to the vase game next Saturday.”

Thanks to Garry Mollon for this report.