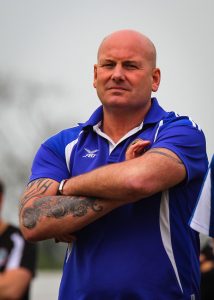 With halloween approaching, Glasshoughton Welfare joint manager Darren Holmes believes his side can look in the mirror and be satisfied with their start to the season. Picture: Jon Knight

Darren Holmes says Glasshoughton Welfare have to be really proud of the way they have started the season after climbing to fifth.

Saturday’s cruise-control 3-0 win over Shirebrook Town was their fourth straight league victory and Holmes, who wants his and Lee Vigars’ side to improve on last season’s sixth-placed finish, is delighted with how things are progressing.

The Welfare joint boss also highlighted the team spirit as a key factor.

“I think we surprised a lot of people last season by getting in the top six,” Holmes told Non League Yorkshire.

“Teams this year are expecting a tough game against Glasshoughton and expecting us to be a top six side.

“We lost our opening game at East Yorkshire, which was an awful performance, so we started off a bit slow, but have gradually picked up a lot of momentum.

“In terms of away wins, we have picked up some outstanding wins. We won at Hallam, Armthorpe and we had a great win at AFC Emley last week.

“We haven’t had the easiest of starts, it has been tough, but we have started a lot better than last season. After 15 games last year we had 15 points. Now we are averaging more than two points a game this year.

“We have a great team atmosphere and that is what pulled us through last season and got us over-the-line for the play-offs. It was a great team spirit and we have it again this year.

“Quietly we have set our target on finishing in the top four to improve on last season. We haven’t started singing and dancing about what we are going to do.

“We have quietly sneaked up into the top six and now we’re there we want to stay there. We haven’t got a massive budget and I think we are doing really well with the budget we have got.

“Who knows what we can do? The lads are believing, training well. We’re getting results and keeping clean sheets. At the moment, we just want to beat last year’s finish and if come Christmas we’re still in the top six and in with a shout, who knows?

“The target is top four, we’re not looking at anything else. It would be a massive achievement. There’s a lot of big budgets in this league. We haven’t got one. For us it is about team spirit and lads working hard for each other.”

Glasshoughton have also reached fifth with a relatively new-look side. A number of key members of the team that stunned the league by reaching the play-offs have moved on to pastures new – notably Alex Marsh, Rob Oldham, Connor Rollinson, Lewis Akeister, Conor Glavin and Andy Horbury.

Eight of the squad that faced Shirebrook either joined Welfare in the summer or since the start of the season.

“We haven’t brought in five or six brand new players overnight. We started the season with a similar squad to last year. Unfortunately one or two players decided to move on.

Holmes also admitted that the victory over Shirebrook was straight-forward.

“It was a performance where we have done just enough,” he said.

“I think it was an under-par performance, but we have done enough and we were professional and got the three points.

“It could have been a lot better. Our passing could have been better. We never really had to get out of third gear and Mat (Zaniewski) got a bit cold in the second half because he didn’t have a great deal to do.

“But we’re going away happy because it keeps us in touch with the top four.”