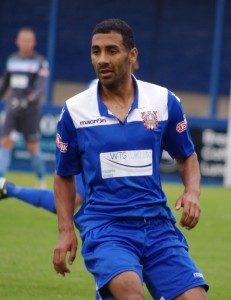 Injury-hit Garforth, with a makeshift centre-half pairing, gave absolutely everything at Bracken Edge, but ultimately could not hold out in the Leeds derby which saw the Ammers enjoy one of their biggest crowds in recent memory.

Garforth encountered a blow in only the third minute as left-back Aodhan Brownlee hobbled off injured.

Still they gave as good as they got as Mark Ferguson was given acres of room down the middle of the park. His shot though was straight at Graham McLachlan.

Garforth’s goalkeeper Toby Wells, one of their star performers this season, then made one of the saves of the match from a through Fernando Moke – one of many former Garforth players in the home side’s starting 11.

Moke was then denied again shortly after – again from close range.

Wells continued his great form in the second half, with early stops from Moke and another ex-Garforth player Matt Dempsey.

Even though the Ammers raised the pressure levels, Garforth still were a threat. That showed when prodigal son Mark Simpson went close.

Ash Flynn has been the regular hero for the Ammers, but on this occasion it was St Juste who began his career with Garforth way back when in 2003.

The experienced winger had too much room on the left-wing and was allowed to waltz across the dead-ball line before sending the ball into the roof of the net.

That was all the league leaders needed.