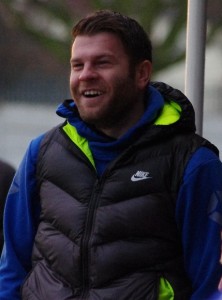 Hallam manager Ryan Hindley expects his departing young winger Callum Greaves to forge himself a career in the Football League.

The 17-year-old is signing professional forms with League One side Chesterfield tomorrow after signing off from Hallam with the fourth goal in their win at Glasshoughton Welfare.

That was his second goal since the start of the Toolstation NCEL Division One season.

Hindley told Non League Yorkshire: “One of the shining lights of our season is Callum Greaves and I wish him all the best and success at Chesterfield.

“It is all about players progressing for me. We obviously had Jake Wright, who got a professional contract at Sheffield United. Now we have had Callum do the same with Chesterfield.

“It has been on the cards for about two weeks. He is a 17-year-old playing men’s football and he hasn’t lost a game.

“He has scored two or three important goals for us and he looks like a man in a 17-year-old’s body.

“He will tackle, he is strong in the air and he will finish. What more do people want?

“It is another proud moment for us. It is about giving people the opportunity as nobody will make a footballer if they’re not playing.

“We have took a punt in terms of chucking him in the first team, but he has taken to it like a duck to water.

“I believe he will go and make a career out of football. He has had rejection at Scunthorpe and I don’t think he wants that again.

“If he does make a career out of it, there’ll be no-one prouder than his mum and dad and myself and Rob Ward, who has worked with him in the under 19s.”