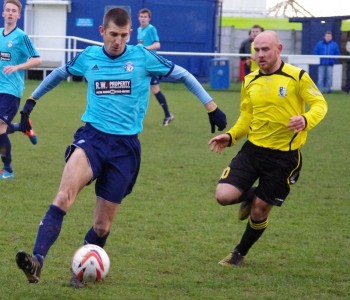 Hallam continued their brilliant start to the Toolstation NCEL Division One season by consigning Glasshoughton Welfare to their first league defeat with the 4-2 victory at Leeds Road.

Some of Hallam’s attacking play was a joy to behold and that’s how Glasshoughton were undone as Ryan Hindley’s side were leading by three goals by the 50th minute.

A year ago Hallam were sinking and heading out of the NCEL after a terrible opening ten games which were all lost. Under Hindley the club has been transformed and after six matches, his side are unbeaten and second.

The Sheffield-based club are playing with confidence and togetherness which was very evident to see at Glasshoughton.

Intricate passing was behind the deadlock breaker halfway through the first half. Glasshoughton’s defence was carefully unpicked and Jack Hargreaves’ majestic dummy laid the ball on a plate for in-form forward Steve Brammer. Brammer’s first touch left goalkeeper Matt Stables committed so the Hallam striker carefully placed the ball into the bottom from 12-yards.

Within a few minutes, Glasshoughton failed to deal with a deep free kick and Michael Blythen headed the ball over Stables for the second goal.

Hallam did enjoy a degree of luck for seemingly killer third strike straight after the interval. Brammer’s deflected cross bounced nicely and Hargreaves drilled the ball home from the edge of the penalty box.

However, Hallam probably did not expect Glasshoughton’s response. Under Mick Norbury, Welfare have been capable of beating anyone in front of them and his side went onto cause Hallam problems.

The moment of magic revitalised the home side and the Hallam defence suddenly became very nervy as Ryan Smith was inches away from pulling another goal back after a mistake.

Assistant referee Michael Leneghan then failed to help Glasshoughton out when Pollock was clearly felled in the penalty area.

That coincided with the end of Glasshoughton’s fightback as Hallam soon put the game beyond the home side’s reach as Chesterfield-bound Callum Greaves struck with a low effort that beat Stables at his left-hand near post.

Glasshoughton reduced the deficit in the dying seconds with Louis Penty’s penalty.