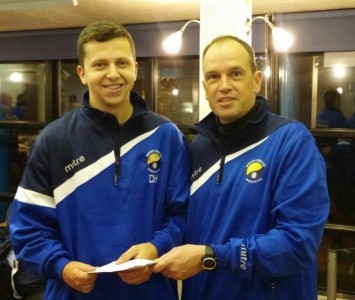 Take out the ‘I’ and put ‘we’ and ‘I get knocked down, but I get up again’ is an appropriate anthem for Garforth Town after just eleven players and no substitutes made sure the Adrian Costello era started in unbelievable fashion.

Costello watched on with the fans chanting his name as his patched-up Garforth team romped to a 5-0 dream victory over a poor Armthorpe Welfare side in the West Riding County Cup second round.

There was a pumped-up atmosphere as Curtly Martin-Wyatt (2), Danny Harris, Jassim Alali and Spencer Lund secured their progression.

It firmly closes the chapter on a traumatic two weeks which has seen Graham Nicholas and six players leave for Ossett Town.

Costello, appointed seven days ago, had originally signed three players for Saturday’s clash with Parkgate to ensure he had enough players, on top of those who stayed loyal, eligible to face Armthorpe.

When the weather intervened, it left the new Garforth boss with a huge problem as the trio could no longer take part because of County Cup rules.

More players were expected to depart for Wakefield until talks at a high level between Garforth and Ossett finally brought a ceasefire to the mass walkout from the J.S. White & Co Community Stadium.

Combined with players coming back from the cold, Garforth managed to get eleven out on the field and ultimately it made the victory even more sweeter.

Armthorpe raised the white flag after Martin-Wyatt scored from close range on the half-hour mark, but Garforth were sublime considering their recent problems.

Costello said last week that he togetherness and he got that at the first time of asking.

The visitors had no answer for Garforth’s powerful attacking display. Harris, by far Garforth’s best player, set the second up by crossing for local lad Spencer Lund to score.

A Garforth victory was no longer in doubt at this moment, it was just a case of by how many.

Harris deservedly put his name on the score-sheet with a drilled finish minutes after his best mate Ash Preece rattled the post.

Winger Sinmi Oyebanji, a player sparingly used this season, set up the fourth with a neat cross for Martin-Wyatt to head home.

Martin-Wyatt, who could have easily scored five times, had his hat-trick stolen off him for the fifth goal. The striker did all the hard work by taking the ball round the Armthorpe goalkeeper, but had his moment of glory taken away by Alali, who fired into the empty net.

Five was the perfect tally and a superb reward for Garforth’s supporters, volunteers and owners for their patience and hard work in the last two weeks.

One thought on “Unbelievable start for boss Costello”