Here is the 32nd in our weekly series profiling players across the region. Each week a different player will reveal their best (and worst) moments. One club men are very rare these days in football, but Knaresborough Town have one in Jim Bradley. 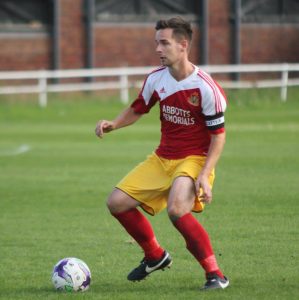 All-time favourite player and why?: Lee Bowyer (ex Leeds United) Use to go watch Leeds a lot when I was younger with my dad. I loved how he played the game and his desire.

Description of Career Highlight: Probably winning the Toolstation NCEL League Cup against Eccleshill United at Bradford City on penalties in 2014. It was a fantastic day out for us and our fans.

Lowest Moment in Football: Being injured this season and missing the first 6 months of the season. So hard being on the sidelines. 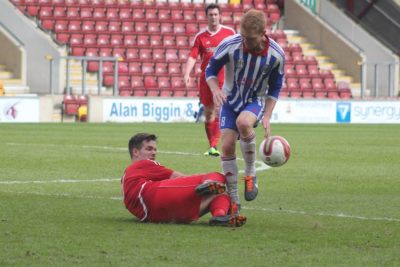 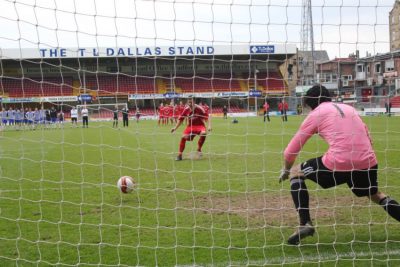 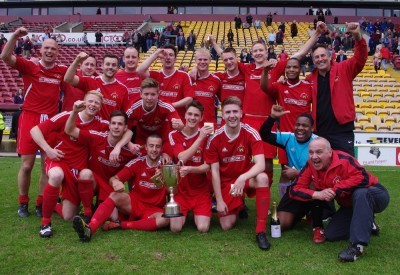 Description of Most Memorable Match: Long Eaton away in the League Cup in 2014. We set off late after waiting for a couple of our players to arrive. We didn’t get to the ground until five minutes to kick off and they wouldn’t put the kick off time back. So we literally through our kit on and kicked off. No-one would of expected but we beat them 1-0 and made it to the final at Bradford city where we beat Eccleshill.

Description of First Red Card (at semi-professional level): Picked up enough yellows in my time, but surprising never a red.

Description of First Goal (at semi-professional level): I had to do some research for this as I don’t score that many so couldn’t actually remember. But I’ve been told it was against Rossington Main away (22/10/13). I remember playing a one-two with our centre forward at the time. It came back to me about 20 yards out and just hit it. 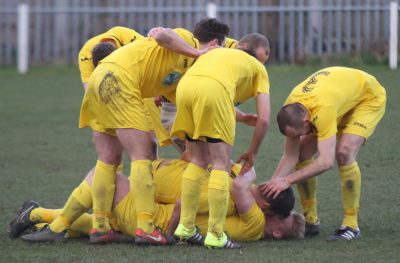 Love is in the air: Knaresborough celebrate Jim Bradley’s screamer at Ollerton in March – a goal that Bradley rates as his best. Picture: Craig Dinsdale

Description of Favourite Goal (at semi-professional level): This was easy as it happened a couple of weeks ago – away against Ollerton Town where we won 4-0. A corner got swung in from the right. I normally have to sit back and defend when it’s our attacking corner but they only left one up front. So thought I would sneak forward to the edge of the box. It got headed out to the left hand side of the area and on the half volley I just hit it with my left foot. I couldn’t of caught it any sweeter. It flew like a Bullet straight into the top corner. Then all I remember is a massive pile on from the lads.

What do you want to achieve in football in the future: Well since I’ve been at Knaresborough since I was 14 and made 478 first team appearances I would love to hit the 500 mark. And to cap that off I would love to get Knaresborough promoted. With the team and the management we have in place there’s no reason why that can’t happen very soon.

Favourite Non League Ground I’ve played at (barring your own club): Got to be Bridlington Town. Pitch is like a carpet.