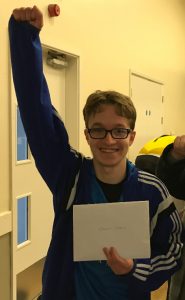 Back in September, young Nostell Miners Welfare Disability Football team player Callum Deary was just playing football in his garden. Now he’s off to play for the Mencap GB team at the European Championships in Geneva in the summer.

Callum impressed enough during the trials at Crofton Community Centre on Sunday to win a place, along with Pontefract Pirates player Ryan Gore, in the 15-man squad.

“Ryan has played for the Pirates for a long time and he deserves a chance like this. The story behind Callum is absolutely unbelievable.

“To go from not actively playing football to being picked for a GB team in the space in four months is incredible.

“We only set the Nostell team up in mid-September and looking at what has been achieved in a very short space of time, there is now a clear signal out there broadcasting the kind of opportunities available, not just at Nostell, but at Pontefract as well.”

“I saw an advert for the sessions in August and I thought they would be good for Callum. Never did I think that in four months he would be going for trials for the Mencap GB team and winning a place.

“I can’t thank Connor and James enough for what they have done for Callum. It is a once in a lifetime opportunity and it will be a fantastic life experience for him.”

Kevin Allsop, the Nostell chairman, said: “We’re really proud of Callum and let’s hope this is the start of many more brilliant opportunities which will come for all the lads in the team.”

The Pontefract Pirates train on a Saturday between 10am and 11am at Pontefract Collieries.

Both clubs are always looking for players.