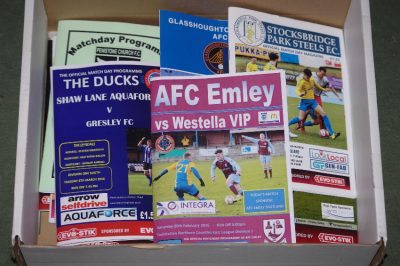 Is it is the end for Football Programmes?

The call for the death of Football Programmes by Football League clubs has been a long time coming.

Regardless of what the die-hards say, it is time to consign programmes to the great dustbin in the sky, certainly in the NCEL for starters. The case for that is extremely strong.

Producing a programme, for most NCEL clubs, is a job they could do without and there is mostly no reward. There are loads of examples of NCEL clubs selling only one-or-two on a match-day, despite printing over 20. Environmentalists would have a fit about the amount of paper wasted.

There are some fantastic programmes in the NCEL such as Handsworth Parramore’s, Glasshoughton Welfare’s, Bridlington Town’s, AFC Emley’s and Selby Town’s, but they are in a minority. The majority of clubs are really struggling to fill the programme editor position and even produce a programme.

A strong social media presence and to a certain extent an up-to-date website are far more important. That’s where people access their information in 2018, not in programmes.

Just because a bloke has travelled 100 miles to tick a club off his list and expects a programme doesn’t mean you should have to produce one. A lot of those demand programmes have never been involved in the running of a Non League football club.

Non League football clubs are small businesses and producing programmes, in a lot of cases, make no financial sense. Unless you’re a club selling lots of advertising space (which few will be) or a club who have a very good deal with a local printer, programmes are not cost effective. Some must lose a fortune financially producing programmes.

People say programmes are part of our football heritage and losing them would be like the end of civilisation.

I know call it evolution. There needs be a different way of thinking.

When you enter a Non League ground, what is one of the first things you want to know?

In most cases, it is probably where’s the bar. For a lot of people it is who’s playing today/tonight?

Programmes won’t tell you that because most of the information is out-of-date because it has been printed at least a day in advance.

It should be mandatory for NCEL to print 50 team-sheets for the crowd. On the other side of the sheet, clubs could use the space to highlight sponsors, player sponsors and their upcoming fixtures and recent results. A double-sided sheet would also get the club’s message across more effectively than a programme would because the readership would almost be 100% higher.

In this day and age when volunteers and money are hard to come by for most Non League clubs, programmes are very unnecessary.

6 thoughts on “The end is nigh for football programmes”