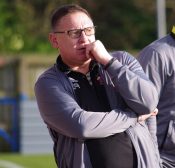 The FA should sit on their hands and wait for a clearer picture before making a judgement on the future of the season, according to Liversedge manager Jonathan Rimmington. Although surveys for feedback from clubs on what to do have been sent out, The FA are clearly hovering their finger over the nuclear button nearly  read more→

Pickering Town manager Steve Roberts has admitted the NPL’s erratic decision-making in December took a mental toll on him.  Pickering, alongside the rest of the NPL, went through the mill before Christmas when the league botched an attempted restart. The NPL announced on December 14th that the campaign would remain on hold and be looked  read more→

New Goole AFC manager Mike Carmody has recruited four of his former Armthorpe Welfare players. Although it remains unclear whether the Toolstation NCEL season will even restart, Carmody still needs to remain active in the recruitment department. Because of the surprise sacking of Mark Pitts and Simon Portrey, the Goole squad there’s been a few  read more→

The magic man is here. Hall Road Rangers attacker Joe Dale is the latest subject of our weekly Player Profile feature. Best known for his days banging in the goals for Christian Fox and the swashbuckling Selby Town side of 2017/18, Dale has a few interesting tidbits from his short Non League career which incredibly  read more→

Striker Richard Medcalf’s Non League Journey has come full circle. It began at Hall Road Rangers in the mid-2000s and now he’s back at Hall Road Rangers banging in the goals for Leon Sewell’s side. Scarborough Athletic fans will remember him fondly from their early days as he was a key part of their 2009  read more→

Steeton boss Roy Mason made a broadcast to the nation this week in an appearance on BBC1 show The Bidding Room. Mason was the fifth seller in Friday’s show, presented by former Dangerfield star Nigel Havers, which sees five people separately come face-to-face with five dealers who bid for their items. The Steeton manager brought  read more→

The boards of all three Steps 3 and 4 leagues believe the season should be “declared null and void”. However, that decision will not be taken just yet and might not happen as the FA are going to be asking for the views of clubs from Steps 3 to 6 on what should happen. Null  read more→

Mike Morris only started playing Non League football when he was 26. Yet despite his lateness to the stage, Morris has enjoyed some fabulous moments and played in front of big crowds. He’s even seen a robot resembling Jesus bust out some dance moves in an opposition’s half. He was a key member of Billy  read more→

North Ferriby were busy completing the signing of Bridlington Town striker Joe McFadyen before the national lockdown was announced. The former Westella hit-man may have to wait some time for his Ferriby bow, with the season unlikely to resume anytime soon. McFadyen leaves Brid after scoring five times for Brett Agnew’s side this season. He  read more→