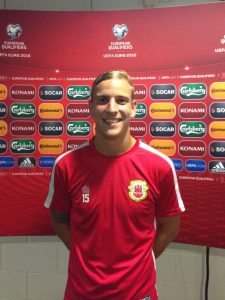 Gibraltar striker Adam Priestley is going to be playing his football for Alfreton Town this season.

Priestley left Shaw Lane at the end of last season and his move to Derbyshire will disappoint a lot of Yorkshire Non League football fans.

Priestley is a popular striker in the area after spells with Garforth Town and Farsley Celtic.

He has been training and playing for Alfreton all summer. He was spotted by an Alfreton scout at the end of last season while playing for Shaw Lane.